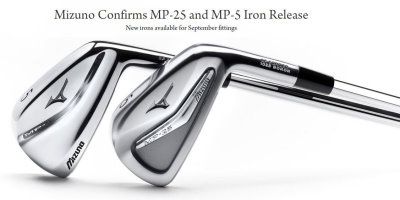 Mizuno, founded in Osaka, Japan, in 1906, has long held an enviable industry- and tour-wide reputation for crafting the very finest forged ‘players’ irons’ on the market – clubs that offer the ultimate blend of looks, feel and workability. For many years, the brand’s highly acclaimed MP Series irons have been the club of choice for many of the world’s greatest players, and the best players at club level too.

Mizuno’s latest MP Series incarnations – the MP-5 and MP-25 – will further enhance that reputation and appeal when they arrive in retail stores in September 2015. After the huge success of the JPX 850 Forged irons, Mizuno is bringing the proven ball speed advantages of #boronfuelled technology to its MP line-up for the first time in the stunning new MP-25, a compact Boron forged iron boasting a tour-inspired design, with an injection of Boron for added ball speed and distance. This is the first true high ball-speed iron designed specifically for tour players through to low/mid handicap amateurs. Rather than seeking to cram distance technology into the smaller shell better players prefer, the MP-25 starts from a pre-determined tour-dictated profile, with engineers then ingeniously adding in ball speed via the Boron forged technology that has proved so popular and effective in the JPX 850 forged.

Mizuno has been Grain Flow Forging its iron heads for 30 years, a process that compresses and maintains a consistent grain through the neck and hosel, guaranteeing greater consistency and precise distance control. The MP-25 heads are Grain Flow Forged from a single billet of 1025 Boron steel, with the injection of Boron allowing a Micro-Slot pocket cavity to be engineered into the longer irons (from 3- to 6-iron) for greater ball speeds, while still delivering the feel and touch that tour players demand. The brand’s Yoro craftsmen have also worked hard to ensure that the MP-25’s shape and profile more than meet with the approval of its target players.

“We started off with a tour-preferred chassis, and developed our technology to get the most ball speed from that size,” says Tetsu Kanayama of Mizuno’s Japan R&D team. “The craftsmen at Yoro, Japan kept the CAD engineers on a tight leash, so the final iron was something we could confidently show our tour players!”

The groundbreaking MP-5 is neither blade nor cavity, but rather a revolutionary #channelback that really is a forged iron like no other. Designed for ultimate feel and workability, and sitting neatly between Mizuno’s classic MP blades and smaller players’ cavity-backs, the MP-5’s ‘Channel Back’ design represents the combined fruit of traditional Japanese craftsmanship and the wonder of modern-day CAD design.

The Channel Back design keeps an appropriate degree of thickness behind the central impact point to deliver the blade-like feel better players crave on pure strikes, while allowing sufficient clubhead mass to be relocated to parts of the head where it can tangibly increase clubhead stability and performance on off-centre strikes. The head may be larger than a traditional blade, and the top line a little thicker for a more powerful look as a result of extensive testing among professionals, but Mizuno’s skilled craftsmen have cleverly been able to retain the sense of proportion and shape needed to suit the eye of better players at address.

“Marrying the skill sets of our CAD-based engineers with the more traditional craftsmen in Yoro Japan, we’re able to produce beautiful irons that play a lot more forgiving than you would imagine by looking at them,” says David Llewellyn, head of design at Mizuno. “I think Mizuno is pretty unique in still having craftsmen that worked in the era before CAD design, which means our irons have a kind of emotion and history built into them.”

From an original spirit and desire to “create the best products for consumers”, Mizuno has become recognised the world over as the clear leader in golf club forgings, with its Grain Flow Forged irons still manufactured in Hiroshima, Japan. The MP-5 and MP-25 offer the best performance benefits that modern technology can bring, while still adhering to the spirit and desire that the brand has held so dear for nearly 110 years. #NothingFeelsLikeAMizuno.

For further information on the MP-5, the MP-25 and Mizuno’s full range of golf equipment, apparel and accessories visit http://golf.mizunoeurope.com/