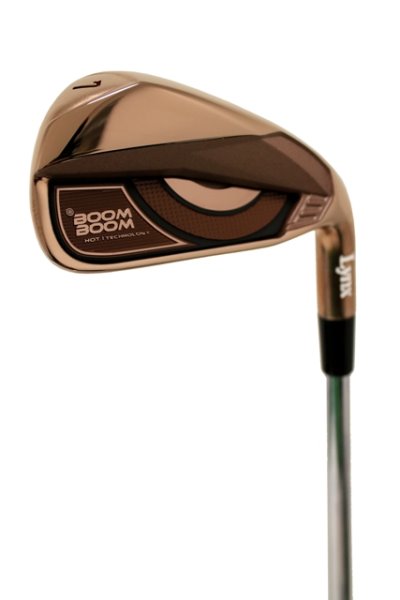 This feature , when combined with variable face thickness, gives ‘phenomenal distance and feel’ from a top-grade one-piece cast head.

As well as their stunning performance, the cosmetics are sensational and sleek too – with a beautiful combination of a rose gold and black finish. A hi-specification steel or graphite shaft with simple, but classy, black Lynx 360 grips complete the look.

Said Lynx’s Stephanie Zinser: “The rose gold finish is of a very high-quality and is subtle, yet distinctive enough to be a genuine talking point for those golfers who like to stand out from the crowd.

“We don’t believe there is a better-looking golf iron in the market. And when you combine the looks with the outstanding performance the Boom Boom irons deliver, then we are confident that golfers will find them a joy to own and use.”

Lynx’s Boom Boom clubs are the flagship marque in the Lynx stable and all benefit from the pioneering innovation for which Lynx Golf  UK is becoming universally recognised.

Lynx Golf continues to establish itself as a forward-thinking and exciting equipment brand in Europe and is dedicated to supporting ‘green grass’ Pro shop business, with more than 400 accounts in the UK.