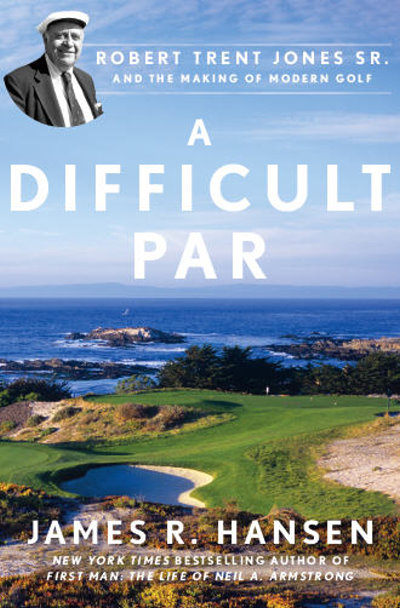 Hansen’s profile of renowned golf course architect Robert Trent Jones Sr. is an expertly researched and written reflection on the life and career of one of the most prolific, well-respected and transformational figures in the history of golf.

“Robert Trent Jones was a colossus of the game and his contributions to golf course architecture undoubtedly influenced the way championship golf has been played over the past 65 years,” said Michael Trostel, senior historian for the USGA Museum. “In A Difficult Par, James Hansen uses exhaustive research methods to deliver a comprehensive depiction of the man who shaped the landscape of modern golf, skillfully weaving together the story of family and business to break new ground on one of the game’s most celebrated and significant designers.”

“To have the USGA and Herbert Warren Wind associated with a book that I wrote is a huge honor,” said Hansen. “There is no name in golf writing more respected or more prestigious than Wind. As a writer, it is the ultimate distinction in my career.”

With the help and cooperation of Jones’ sons, Robert Jr. and Rees, who shared letters, documents and personal stories of their father, Hansen pieced together the life events and struggles that the British-born Jones encountered on the way to creating his legacy.

A gifted and passionate golfer, Jones served as the first golf professional at Sodus Bay Heights Golf Club in Sodus Point, N.Y. During his tenure, he caught the eye of club president James D. Bashford, who sponsored Jones and encouraged him to enroll in Cornell University’s architecture program.

At Cornell, Jones tailored his curriculum in landscape architecture and agronomy to create a degree in golf course design and management.

Upon graduation, Jones struggled to find work in a U.S. economy that was mired in the Great Depression. His patience, timing and relentless pursuit of his dreams eventually paid off, as he passionately and successfully promoted the construction of new golf courses as a wise use of public money and labor that had become available under President Franklin Delano Roosevelt’s Works Progress Administration (WPA), part of the New Deal initiative.

A Difficult Par focuses not only on Jones’ achievements in design and architecture, but also on the personal and financial challenges that he faced throughout his career. Hansen carefully details the family dynamics and professional rivalries that occurred during the latter part of his career.

“Of all the architects, I think Robert Trent Jones was the most significant in the development of American golf courses,” said Hansen. “It wasn’t just the longevity of his career, but also how his courses came to be the dominant venues for championship golf.”

Jones designed or redesigned nearly 450 courses in 42 states and 28 countries, including 11 courses that have hosted a combined 34 U.S. Opens. His design philosophy of challenging the best golfers while making the game enjoyable for players of all abilities became essential in making the game attractive to casual players and made him an archetype for future designers.

The Herbert Warren Wind Book Award was established in 1987. The award recognizes and honours outstanding contributions to golf literature while attempting to broaden the public’s interest in, and knowledge of, the game of golf. Wind, who died in 2005, was a famed writer for The New Yorker and Sports Illustrated who coined the phrase “Amen Corner” at Augusta National Golf Club. He is the only writer to win the Bob Jones Award, the USGA’s highest honour.

Hansen, a professor of history in the College of Liberal Arts at Auburn University since 1986, has written 10 books about the history of aerospace, including First Man: The Life of Neil A. Armstrong, as well as numerous articles for golf publications. The Herbert Warren Wind Book Award will be presented to Hansen on Feb. 7 at the USGA’s Annual Meeting in New York City.

The USGA is currently accepting submissions for the 2015 Herbert Warren Wind Book Award. To be eligible, a book must be an original full-length work about golf, written in English, and must have been published between November 2014 and October 2015. For more information, contact Nancy Stulack, the USGA Museum’s librarian, at 908-781-1107 or nstulack@usga.org