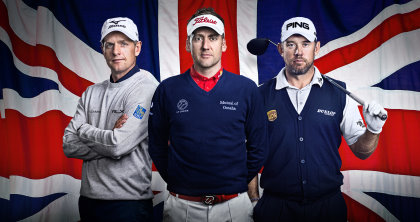 Sky Sports is a supporting partner of a European Tour event for the first time at the British Masters and will be offering a different approach to coverage, promotion and staging of the event at Woburn.

Working with The European Tour and its leading players, Sky Sports aims to engage and excite new and existing golf fans. This will include unprecedented interaction from host players Ian Poulter, Lee Westwood and Luke Donald.

The opening round is completely sold out, with more than 15,000 spectators taking advantage of the ‘Sky Sports Thursday’ offer giving Sky customers the chance to be at the event for free.

Ian Poulter, host of this year’s tournament, said: “The support for the British Masters has been fantastic so far and I’m really looking forward to trying to win the event at Woburn. With the help of Sky Sports and The European Tour, hopefully the tournament can help inspire people to play the game, just as I was inspired by watching Seve and all those great names at Woburn in 1991.”

Poulter, Westwood and Donald will all take part in a question and answer sessions after their round has concluded from Thursday onwards, providing spectators with the opportunity to hear from three Ryder Cup heroes in person.

Sky Sports will broadcast more than 30 hours of coverage of the event including a live masterclass immediately after play ends each day through to Saturday. Using the Woburn course to explain and educate viewers during the course of a tournament is a first in golf broadcasting.

Content from the British Masters will be used across Sky Sports’ multi platforms, and through Soccer AM, Game Changers, YouTube channels and across digital to engage a broad audience of varied ages and interests.

Sky Sports will also commission a replica of the 18th green within the tented village, with Sky Sports golf talent giving putting lessons to spectators during the tournament.

Golf fans between the ages of 16 to 18 were also given the opportunity to caddie for Nick Dougherty at The British Masters Pro-Am, with 17-year-old Thomas Forster the lucky winner.

Dougherty took part in a Sky Sports Living for Sport masterclass last month at a Buckinghamshire School in preparation for the tournament. Nick, a three-time European Tour winner and Sky Academy ambassador, used his experience and golfing ability to encourage and teach the students skills and techniques that will help them improve and enjoy the game.

Tickets for British Masters on the remaining days can be purchased online via www.europeantourtickets.com or www.sky.com/tickets  or via the European Tour ticket hotline 0800 023 2557