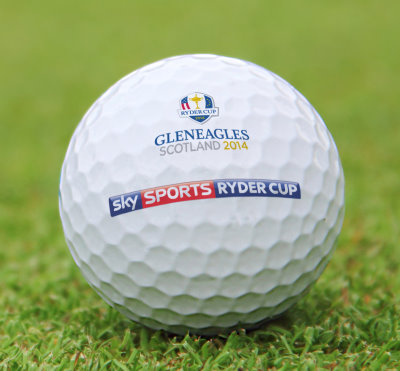 For the first time ever, Sky Sports 4 will become ‘Sky Sports Ryder Cup’ and will show over 330 hours of golf across 14 days, including 36 hours of live coverage from Gleneagles.

The 2014 Ryder Cup is the tenth to be shown exclusively live by Sky Sports.  The channel goes live at 6am on Thursday 18 September and continues until 6am on Thursday 2nd October.  Last year Sky Sports launched ‘Sky Sports Ashes’ for England’s home cricket series against Australia.

Barney Francis, managing director of Sky Sports, said: “We’re dedicating a whole channel to the biggest event in golf, providing viewers with the complete Ryder Cup experience all in one place.  There will be nowhere better for sports fans to enjoy the passion, drama and excitement of this incredible event.  We’ll offer round-the-clock build up, the opening and closing ceremonies and exclusive live coverage of all three days from Gleneagles.  We’re incredibly proud of our partnership with golf and its fitting we mark our tenth Ryder Cup on Sky Sports with an entire channel.  We can’t wait.”

George O’Grady, Chief Executive of The European Tour, said: “The dedication shown by Sky Sports in showcasing both The European Tour and The Ryder Cup is matched only by the continued excellence and innovation of their programming, as will be further illustrated by the ‘Sky Sports Ryder Cup’ channel this September. We are extremely proud of our relationship with Sky Sports and we thank them for their continued commitment and look forward to working together at Gleneagles and beyond.”

Paul McGinley, European Ryder Cup Captain and Sky Ambassador added: “The Ryder Cup is a truly unique sporting spectacle, full of drama, excitement and passion, all of which has been brought to life for the television viewers over the years by Sky Sports. Having worked with the Sky Sports team at major golf events for the past couple of years, I know the professionalism and enthusiasm in place for our sport, all of which will go together to produce a feast of television for golf fans in September.”

Sky Sports will offer unprecedented live coverage of The 2014 Ryder Cup across TV, online and via mobile and tablet devices with Sky Go.  Non-subscribers can enjoy seven days access to the Sky Sports Ryder Cup channel and Sky Sports other six channels contract free on TV and a range of devices with NOW TV.

For live coverage of The 2014 Ryder Cup presenter David Livingstone will be joined in the studio by former winning European Ryder Cup captain Colin Montgomerie, coach to US Ryder Cup stars Butch Harmon, and on Sunday Jack Nicklaus who played in five Ryder Cup teams and captained the USA twice winning in 1983.  Also providing commentary will be Royal Television Society award winners Ewen Murray and Bruce Critchley as well as Rob Lee and Mark Roe.  On course reporting will be provided by Howard Clark who made played in six European Ryder teams between 1977 and 1995, Richard Boxall and Tim Barter, and highlights programming will be presented by Sarah Stirk who will be joined each day in the studio by Andrew Coltart and Nick Dougherty to review the key moments in the previous’ days matches.

From Sunday 21 September Sky Sports News will provide reports throughout the day each in the build-up from Gleneagles as both teams get their first look at the PGA Centenary Course and captains Paul McGinley and Tom Watson fine tune their preparation for the matches. Coverage on Sky Sports News throughout the week will be presented by Kirsty Gallacher with reports from James Haddock.

Sky Sports Ryder Cup will be packed with golf programming including preview shows from Sunday to Thursday of Ryder Cup week, the official opening and closing ceremonies, exclusive interview specials with Paul McGinley and Ian Poulter, and a special preview show on 21 September with Butch Harmon, Colin Montgomerie, Sam Torrance and Tony Jacklin.  The channel will also show the official films from previous Ryder Cups including the ‘Miracle of Medinah,’ a highlights show every evening between 7pm and 10pm and ‘How The Ryder Cup Was Won’ from the following Monday.

Visitors to Gleneagles for The 2014 Ryder Cup will be able to access the Sky Sports Ryder Cup channel for free whether they are Sky Sports subscribers or not thanks to complimentary WIFI provided by The Ryder Cup and access to Sky Sports provided by Sky Go and NOW TV.