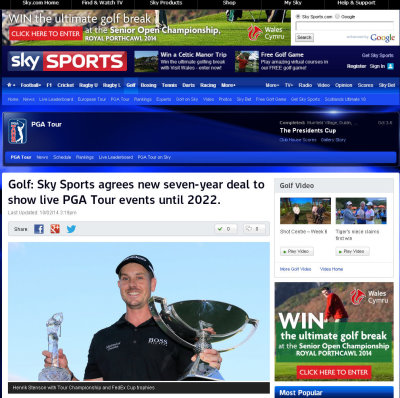 Sky Sports will show exclusively live coverage of the PGA Tour until at least 2022 thanks to a new seven-year deal announced today.

The agreement means only on Sky Sports can viewers enjoy the world’s best golfers including Tiger Woods, Rory McIlroy and Phil Mickelson competing live on the PGA Tour throughout the summer months.

The rights, which begin in 2015, extend Sky’s partnership with the Tour into its 30th year.

The agreement with the US PGA Tour comprises:

Live tournament coverage including featured holes and groups with European players, and highlights packages will be made available on the new ‘PGA Tour Match Centre’ within the Sky Sports iPad app, skysports.com, Sky Sports News and via the red button interactive facility.

From the 2014 FedExCup Playoffs Sky Sports will increase the amount of US PGA Tour events broadcast from on-site each year from five to 31.

Since 1991 when Sky Sports first showed live PGA Tour golf the number of European players competing regularly on the Tour has increased from six to 29 and Rory McIlroy, Martin Kaymer, Graeme McDowell and Justin Rose who compete full-time on the Tour have also won Majors on US soil. Last year Henrik Stenson became the first European to win the FedExCup.

Announcing the new deal, Barney Francis, Managing Director of Sky Sports, said: “Sky Sports is the home of golf, with more of the best coverage of the best players competing in the best events than anywhere else.

“This new agreement with the PGA Tour is huge for us, enabling us to guarantee our viewers long term US golf coverage for the next decade.”

PGA Tour Commissioner Tim Finchem said: “Sky is the pre-eminent sports network in the United Kingdom and has been a valued broadcast partner of the PGA Tour.

“The Tour and Sky strongly believe in the value of our existing relationship and are excited about the future, a future that includes compelling new content that is tailor-made for tournament telecasts in the UK”

The agreement is the latest in a series of long-term rights announcements made by Sky Sports, strengthening its unrivalled portfolio of live sport across six channels.

Sky Sports shows golf every week of the year and will schedule coverage from more than 100 tournaments in 2014.

The line-up includes exclusively live coverage of the 2014 Ryder Cup, the 10th to be shown on Sky Sports in succession, plus the Masters, US Open, and US PGA Championship.

Sky Sports also shows live coverage of 35 events from the PGA European Tour including the Race For Dubai.