Sky and BBC to provide TV, Radio and Digital Coverage of the Open From 2017 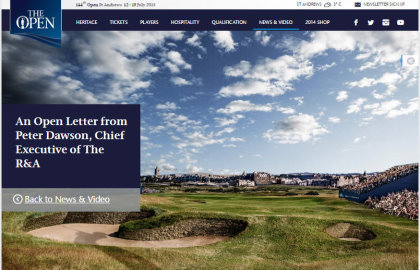 The R&A today announced new five-year broadcast agreements with the UK’s two largest sports broadcasters, running from 2017 – 2021. The Open Championship will, for the first time, be shown live on Sky Sports with prime-time television highlights and live radio coverage delivered by the BBC.

Both broadcasters will provide extensive coverage of the event through their digital channels ensuring golf fans throughout the UK will have numerous ways to enjoy golf’s oldest and most international championship.

Golf fans who do not subscribe to Sky Sports will be able to watch live coverage of The Open through NOW TV with weekly and individual daily subscriptions available and no contract required.

The new five-year agreement with both broadcasters, which commences at the 146th Open Championship, being played at Royal Birkdale from 16 – 23 July 2017, will also allow The R&A, golf’s governing body, to provide significantly increased financial support to golf participation initiatives in the UK and Ireland.

Both the BBC and Sky are committed to supporting The R&A’s efforts to promote participation in the sport through their Get Inspired and Sky Academy initiatives. Additionally, The R&A will undertake a comprehensive strategic review on the subject of golf participation in the UK and Ireland and will ensure that golf feels the full benefit of the enhanced resources available.

Peter Dawson, Chief Executive of The R&A, said, “We believe this is the best result for The Open and for golf. The way people consume live sport is changing significantly and this new agreement ensures fans have a range of options for enjoying the Championship on television, on radio and through digital channels.

“Sky Sports has an excellent track record in covering golf across its platforms and has become the home of live golf coverage over recent years. We are very much looking forward to working with them to develop and enhance the coverage of The Open.

“We have enjoyed a long and successful relationship with the BBC and, although the nature of that relationship is changing from 2017, we are delighted that the BBC will broadcast prime-time highlights and that the Championship will continue to benefit from extensive live coverage on Radio 5 Live and online.

“Importantly, the new agreement will enable us to increase substantially our support for golf in the United Kingdom and Ireland. That our increased commitment to golf in both countries is to be supported by both Sky Sports and the BBC is a hugely positive step for our sport.”

Sky Sports provides live coverage of all four days of the Masters tournament, the US Open and the PGA Championship and broadcasts the Ryder Cup in the UK. It also holds the exclusive rights to cover the European Tour, PGA Tour, Ladies European Tour and LPGA Tour in the UK and Ireland.

Under the new agreement, the number of commercial breaks during the television coverage of The Open will be kept to a maximum of four minutes per hour, with each break running for just 60 seconds.

Barney Francis, Sky Sports Managing Director, said: “The Open is the world’s preeminent golf championship and we are committed to taking coverage of the event to new levels. We offer something for every sports fan and this exciting agreement for The Open means our customers can now enjoy all four Majors live.

“Sky Sports has a passion for golf that has spanned two decades, offering unrivalled commitment, airtime and promotion as well as year-round innovative coverage.  We look forward to working with The R&A to entertain and engage new and existing golf fans through our innovative multi-platform coverage and also at the grassroots level via Sky Academy.”

The BBC has been awarded the right to broadcast prime-time highlights of The Open and has renewed its live radio rights. The two hour highlights package will be shown between 8pm and 10pm each day of the Championship, joining the BBC’s sports highlights portfolio along with Match of the Day and the Ryder Cup.

Barbara Slater, Director of Sport at the BBC, said, “We’re obviously disappointed that we were unable to retain live TV coverage of The Open Championship. However, we’re pleased to be continuing our 60 year partnership with The R&A and feel that a comprehensive two hour highlights programme –­ a format which has already proven successful – in a prime-time slot over four days will allow us to continue to bring all the best action and key moments from The Open to a large free­-to­air audience on TV, radio and online.