“Showdown: The Inside Story Of The Gleneagles Ryder Cup” 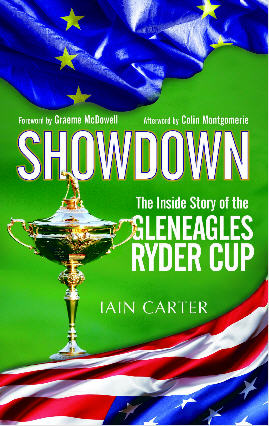 Iain Carter, the BBC Golf Correspondent with access to the key players and personalities, tells the story of one of the world’s most dramatic sporting events.

Europe’s blistering win had been nearly 24 months in the making – on both sides of the Atlantic. Following the ‘Miracle’ at Medinah in 2012, the Americans pulled out all the stops, appointing the legendary figure of Tom Watson as captain. As Watson put it, they were seeking ‘redemption’ for the devastating meltdown they had suffered two years earlier. The Europeans, meanwhile, bet on Irishman Paul McGinley, a diminutive stalwart touring pro, a team man and an astute tactician. It was a fight between acumen and aura. Acumen won.

On this occasion the European triumph was not miraculous; it was meticulous, the product of an extraordinarily detailed plan that rode the dramatic swings of fortune of the golfing calendar. In this period, the golfing world had not just evolved, it had turned on its head. There was a new order. The old were fading, injured, out of form, unable to maintain winning habits. The younger generation had taken over. This book tells the story of a remarkable golfing season in which Rory McIlroy established himself as the world’s top player and Tiger Woods faded from the limelight.

When it came to the Gleneagles showdown, the biggest event in his sport, McGinley’s masterplan came to fruition. Telling the story of this enthralling contest, from the build-up, including the appointment of both captains and the assembly of their teams, through to the dramas of the week in Scotland, this is a fascinating look at the pivotal moments that reaffirmed Europe as the undisputed leaders in the Ryder Cup and prompted a complete re-think for future American challenges.

Iain Carter has been the BBC’s Golf Correspondent for 11 years, leading commentary teams for BBC Radio 5Live at major championships and Ryder Cups. Iain travels the golfing globe to provide reports, blogs and tweets from all of the game’s most important tournaments. A sports journalist since the mid-1980s, he also commentates on rugby and tennis. He is the author of Monty’s Manor: Colin Montgomerie and the Ryder Cup (2010).

Showdown: The Inside Story Of The Gleneagles Ryder Cup By Iain Carter

with Foreword by Graeme Mcdowell and Afterword by Colin Montgomerie