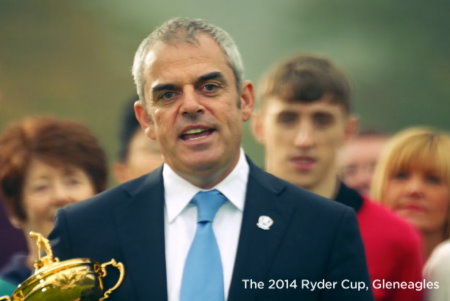 European Ryder Cup captain Paul McGinley has played a starring role in a new £5.3m campaign by VisitScotland to promote the multitude of global events taking place in the country in 2014.

The 2014 Ryder Cup at Gleneagles and the Junior Ryder Cup at Blairgowrie both feature heavily alongside the Commonwealth Games in Glasgow and Scotland’s Year of Homecoming in the new adverts, entitled Scotland’s Brilliant Moments.

The advert sees a number of Scots reading a line from a specially penned poem, against a backdrop of dramatic Scottish locations, including Speyside, Portsoy, Orkney, Gleneagles, Blairgowrie, Glasgow and Edinburgh with McGinley delivering a stirring final line as a surprise element.

McGinley said: “It is a privilege to be Ryder Cup captain anywhere in the world but to do so in Scotland, the Home of Golf, makes it that little bit more special and I was delighted to appear in this advert to represent The Ryder Cup among the other great events taking place in 2014.

“It was fantastic to see so many golfers taking part, especially young Lewis from Blairgowrie, and also to see how Scotland is embracing The Ryder Cup. The atmosphere is going to be terrific come September next year and leading the team at Gleneagles will definitely be one of my brilliant moments.”

Mike Cantlay, chairman of VisitScotland, said: “Scotland in 2014 will be full of brilliant moments and the 2014 Ryder Cup at Gleneagles will undoubtedly deliver many of these. We are indebted to Paul McGinley for sparing his time to be part of our campaign and to help show the world the kind of welcome they can expect in Scotland next year and beyond.”

There will be four adverts – a 30 second ‘master’ with Sir Chris Hoy delivering the final line, and three others, for Homecoming 2014, the Commonwealth Games and the Ryder Cup. These will be played, along with the master, in bursts of TV advertising throughout the year, and will feature musician Nicola Benedetti and Ryder Cup captain, Paul McGinley.

The advert has been directed by Richard Oliver, who has worked on a number of big brand campaigns, most recently Road Safety Scotland, starring David Coulthard.

As part of the campaign VisitScotland is asking viewers to post images or videos of their own Brilliant Moments in Scotland. You can watch the series of advertisements here http://www.youtube.com/watch?v=n6To0Gf707o&feature=c4-overview&list=UU1FdvQG5MFwzv0PY6dMsaFg

Every country has its moment. Its time to shine.

When the universe conspires and planets align.

Scotland invites you, our stage is set.

To the home of golf, returns the Ryder Cup.

History made, as legends square up.

We welcome the world to come and to share.