Foresight Sports’ GCQuad launch monitor has been chosen for a prestigious hat-trick of awards from the most influential golf publications in the UK and US.

Golf Monthly, Today’s Golfer and Golf Digest all picked the GCQuad for their top award, singling out its unprecedented accuracy when delivering both ball and club data to club fitters, coaches and those conducting equipment testing for the magazines. 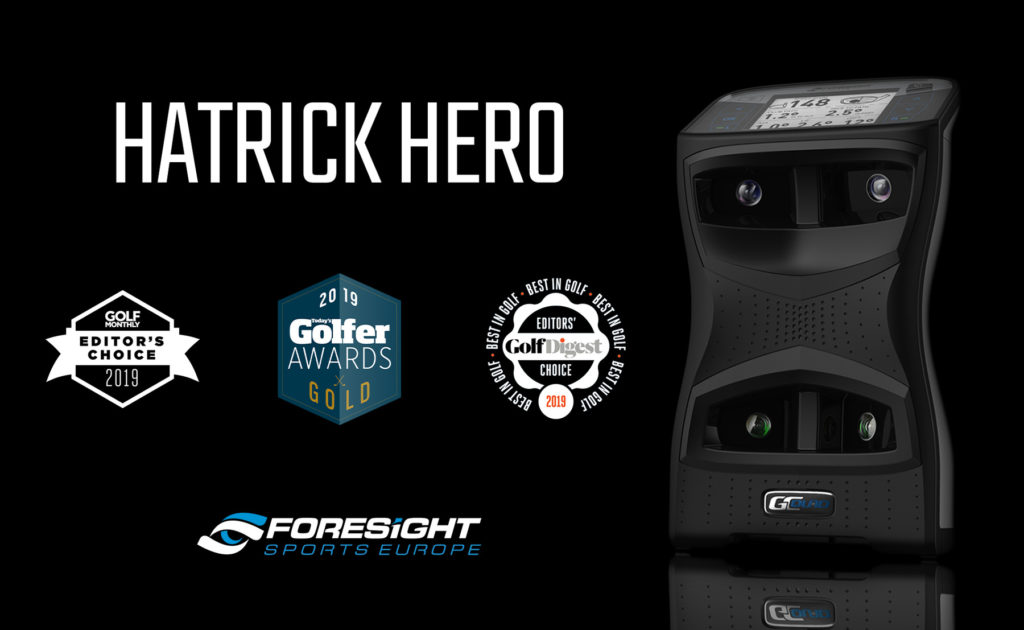 Golf’s most advanced and accurate launch monitor was chosen for the second year-in-a-row by popular title Golf Monthly in its Editor’s Choice Awards. The magazine’s technical editor, Joel Tadman, who conducts all his data testing with a GCQuad, was in no doubt why it was picked again. “With no calibration needed, the GCQuad is easier than any of its competitors to take to the range or course, with all your shot data handily stored on the brand’s cloud system for later analysis. Throw in its removable battery, WiFi, and a hitting area six times bigger than its predecessor, and you’re undoubtedly looking at one of the hottest products in world golf,” he said.

As well as choosing the GCQuad for their Editor’s Choice award for the second time, Golf Monthly also featured the launch monitor in its inaugural ‘Golf Tech 50’, which highlighted ‘cutting edge golf products that can help serious golfers take their game to the next level’.

The UK’s top-selling magazine, Today’s Golfer, chose the GCQuad for its 2019 Gold Award – the only one handed out in its launch monitor category. Editor Chris Jones, who commissioned the publication’s biggest ever gear test to be carried out using the GCQuad, changed the rules when it came to the awards category. “We have three Gold Award winner’s usually in each category, but after seeing what the GCQuad can do, and how it’s aided in our Top Gear testing, we only went with one Gold Award in the launch monitor category, and there was only going to be one winner,” he said.

The GCQuad was also the big winner in the USA, picking up the prestigious Golf Digest Editor’s Choice award for the third year running.

“It’s fantastic to be recognised by three of the most recognised popular magazines here and in the US,” said Foresight Sports Europe Director Edward Doling. “The GCQuad was built from the ground up, pushing the boundaries of technology to create the most accurate, reliable and versatile launch monitor on the market and we’re delighted it’s helped data collection in some of the biggest and regular tests in golf.”

Building on the cutting-edge innovation of its GC2 predecessor, the Foresight Sports’ GCQuad – the world’s first quadrascopic launch monitor – incorporates a number of state-of-the-art innovations designed for everyday use by club fitters, instructors, players and world-renowned coaches to deliver a full spectrum of real-time ball and club data.

Advanced imaging technology and a lightning-fast processor powers the most precise cameras that can catch 200 pictures during impact providing millimetre accurate strike and shot data within seconds. In addition, the GCQuad can now provide data for every club in the bag, following a putting dimension added last year. Accurate real-time measurement captures every detail of the club delivery, along with the carry, skid and roll characteristics of the putt, plus club head speed, efficiency, angle of attack, horizontal path, delivery loft, delivery lie, face angle, ball impact location and closure rate.