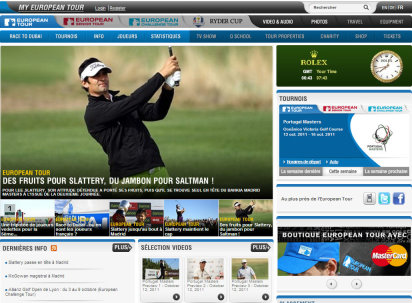 French and German versions of www.europeantour.com have been launched this week., marking the first step of a multilingual programme to showcase The European Tour in local languages.

fr.europeantour.com is managed in partnership with French telecommunications company SFR, part of the Vivendi group, with de.europeantour.com produced in association with Golf.de, official partner of the German Golf Federation and producer of The European Tour iPhone App in cooperation with BMW.

The strategy of working with local partners and federations within the European Tour family marks a new approach to developing multilingual opportunities with the aim of replicating the model across Europe and around the world.

The multilingual versions will increase access to europeantour.com globally, further enhancing the user experience for the Tour’s growing fanbase from all around the world.

Mark Lichtenhein, The European Tour’s Director of Broadcasting and New Media, said: “The launch of French and German versions mark an important milestone in the development of europeantour.com

“We try to be as responsive as we can to our user base and we appreciate the importance of a localised view of The European Tour.”

Content from fr.europeantour.com will also be made available to the extensive network of SFR kiosks deployed across clubhouses and golf courses within France, taking europeantour.com right into the heart of the playing community of France.

Likewise, content from de.europeantour.com will be available for Golf.de which hosts Germany’s largest online golfing community.

Panos Meyer, Managing Director, Golf.de, said: “To take over the responsibility for the content of the German version of the European Tour website is for us, as the operator of Golf.de, a logical step forward based on our existing partnership with the Tour and our position as the market leader of the German golf online media business.”

The European Tour is committed to celebrating the game of golf and showcasing its diverse global talent and rich landscapes. With more than 30 nationalities represented among the membership of The European Tour and 29 destinations featured during the season, the multilingual versions of europeantour.com will further reflect the multicultural, international diversity which makes up The European Tour Membership and its followers around the world.