A dramatic new 60-second promotional video for Zen Green Stage demonstrates the exciting progress made in 2018 by the Sheffield-based Zen team.

Visible now on Zen Oracle’s YouTube channel, the video was produced for last month’s PGA Merchandise Show in Orlando, Florida, where the Green Stage’s potential to provide the missing X-factor to golf simulators and launch monitors was widely commented upon by representatives of some of the golf world’s biggest technology brands. 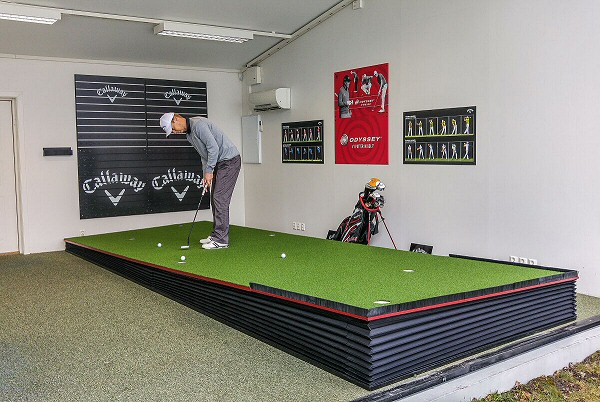 John Rahm and Sergio Garcia also appear, in footage from the Ryder Cup 2018 intercut with Sky Sports studio footage showing presenters attempting to recreate and hole two vital putts the Spaniards made during last year’s matches. These clips also show a preview of the new ‘Zen Eye’ overhead graphics which are set to revolutionise the visual presentation of golf on TV – and in golf academies worldwide – in the next few months.

Described in the video as golf’s new practice revolution, the Tour-proven Zen Green Stage is now gaining popularity for putting, full swing, chipping and approach shots by elite players, golf coaches and academies, and golf-loving amateurs around the world.

With a Zen Green Stage under your feet, you can recreate any makeable putt under 20 feet, use real-world slopes to recreate undulating fairway lies, educate golfers at your academy, and even recreate some extreme, mind-blowing slopes to create memorable entertainment and gaming opportunities based on the sport of golf.

“Golfers and their coaches tend to change their thinking as soon as they stand on a Green Stage” said Zen’s Nick Middleton. “With the impetus already provided by the wonderful team at Sky Sports Golf, we are hoping that it will be seen increasingly on TV around the world in the next few months, and that this will inspire people to own a Zen Green Stage for themselves – and use it to develop that winning mentality.”

See www.zenoracle.com for all information