Amateur Championship Highlights to be broadcast on Sky Sports 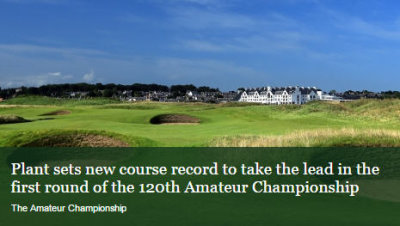 Highlights of the 120th Amateur Championship will be broadcast over four days on Sky Sports 4 this week.

The Championship takes place from 15-20 June at Carnoustie and Panmure in Angus, Scotland and brings together an international field of top amateur golfers from 30 countries. A place in the 144th Open at St Andrews is at stake for the winner along with a berth in the 2016 US Open at Oakmont Country Club and, traditionally, an invitation to the Masters Tournament at Augusta.

The first two days of The Amateur Championship comprise stroke play qualifying over both courses before the field is cut to 64 and ties and the match play format finds the champion over the final four days’ play at Carnoustie.

The television coverage, which is presented by Rolex, will air on Sky Sports from Friday19 June to Monday 22 June and will include one hour programmes of the Final and the Semi-Finals and Quarter-Finals as well as 30 minute highlights programmes of the third and fourth rounds.

The schedule is as follows: