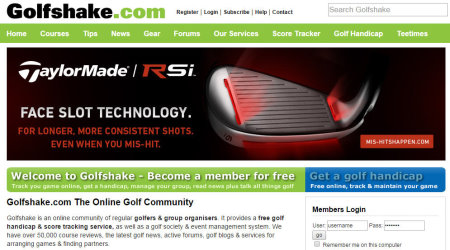 Golfshake.com, which states that it is ‘Europe’s No.1 handicap and stat tracking service, open to all golfers,’ has announced the completion of their popular 2014 Summer Challenge that saw golfers encouraged to play more throughout the season and improve their games.

Impressively, the campaign reached over 750k golfers, delivered 5 million advertising placements for the sponsors and saw 18k golfers reduce their handicap whilst playing over 2 million holes of golf.  Quite simply this was probably the biggest competition in UK golf, open to all golfers.

To take part in the Golfshake Summer Challenge a golfer simply needed to become a Golfshake member and add a round via the Scoretracker system. Every round that a golfer added gave them an opportunity to win some great prizes including a trip to Royal Lytham & St Annes, holidays to Spain and Cyprus as well as equipment from Adams and Skycaddie.

Through the use of the Scoretracker system, which benchmarks a golfer’s game and identifies strengths and weaknesses, golfers were encouraged to set their own goals and targets and challenge themselves throughout the season to make improvements to their game.

Golfers were also supported in their quest to improve by lead partner, Under Armour who, together with Golfshake produced the ‘Better Every Shot’ series of videos. These videos were shot at Open Championship venue Royal Lytham & St Annes and focused on the areas of the game golfers most often need to improve.

The ‘Better Every Shot’ videos enjoyed a high level of engagement, being not only viewed via the Summer Campaigns mini-site, but also on YouTube and social channels. The series of 16 videos has to date been viewed by 10,000’s of golfers.

Golfshake.com’s Summer Challenge reached an impressive number of golfers with an on-site promotion throughout the campaign that was viewed over 5 million times by 790,000+ unique golfers. Golfers who entered into the challenge played over 2.5 million holes adding in excess of 150,000 rounds via Golfshake.com’s Scoretracker system.

The golfers taking part recorded over 54,000 birdies but these were counteracted by over 936,000 bogeys! Golfers participating in the challenge did however enjoy success in improving their game. A total of 18,000+ handicap reductions were made with 4048 full shots being reduced off playing handicaps.

Furthermore the challenge also enjoyed a number of Champagne moments with 116 golfers recording a hole in one.

Attentions now turn to the winter campaign which will be launched in the coming weeks.  Golfers throughout the UK can get set to take part in the Golfshake Winter Birdie Blitz.

HONMA has taken super premium equipment to the next level with the introduction of two new handcrafted BERES ranges - the striking BERES BLACK and uniquely decorative BERES AIZU.

Louis Booth, General Manager at Lincoln Golf Club, who won the ‘Young Manager of the Year’ award at the recent Golf Club Managers’ Association conference is a graduate from Cornwall College