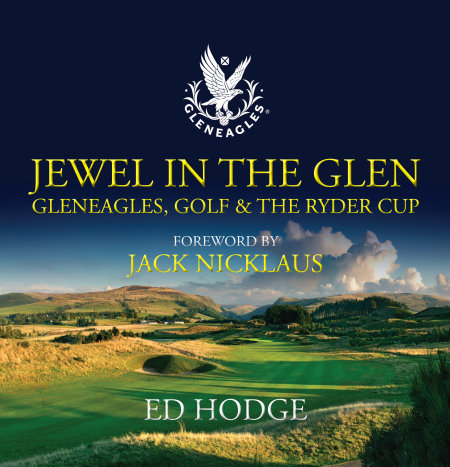 The countdown clock has now passed a milestone date in Scotland’s sporting calendar…less than 100 days until The Ryder Cup at Gleneagles.

What better way to whet the appetite for golf’s greatest team contest than with the resort’s official book, Jewel in the Glen: Gleneagles, Golf &The Ryder Cup.

Written by Perthshire native Ed Hodge, a former Gleneagles employee and well-known Scottish sportswriter, this is a stylish hardback book published by Edinburgh-based Arena Sport, an imprint of Birlinn Ltd, in association with The Gleneagles Hotel. It is a rich celebration of golf at Gleneagles during one of the most exciting times in the iconic five-star resort’s 90-year history.

Ed, who grew up 10 minutes away from Gleneagles in the village of Braco, used his extensive local knowledge and contacts to trace the history of The Ryder Cup back to that famous GB v USA forerunner match at Gleneagles in 1921 that sparked a rivalry for the ages, intertwining the histories of the coveted prize with its own rich heritage, on and off the course.

Ed interviewed an array of international and national celebrities to complete his first book, including Jack Nicklaus – the designer of The PGA Centenary Course that will host The 2014 Ryder Cup – Gary Player, Lee Trevino, Paul McGinley, Tom Watson, Sam Torrance, Sir Jackie Stewart, Andy Murray, Stephen Hendry and Kenny Dalglish, revealing what Gleneagles and the Ryder Cup means to them while examining the impact that the tournament will have on the local community and the wider Scottish society, culture and economy.

With a foreword by Jack Nicklaus, the greatest golfer of all time and the designer of the PGA Centenary, as well as a hole-by-hole guide to the course by Ryder Cup legend, Colin Montgomerie, Jewel in the Glen paints a unique portrait of Gleneagles, Scottish golf and the history of The Ryder Cup.

Ed, now PR & Media Executive for the Scottish Golf Union after 11 years as a sportswriter in Scotland, also spoke with a number of local personalities for the publication, including former Gleneagles head professional Ian Marchbank. The 85,000-word book is made up of 14 chapters and features stunning photography across its 240 pages.

Ed, also a former Gleneagles caddy, said of his first book: “I’m delighted with how well the book has been received since its publication last August and I’m sure all sports fans will enjoy reading it as The Ryder Cup draws ever closer.

“Given my passion for the area, golf, Gleneagles and The Ryder Cup, it’s been a delight to work on this project. It’s a hugely special time for Gleneagles and I’ve enjoyed speaking to so many differing personalities to document the history of golf at the resort and share their love of Gleneagles.”

“Gleneagles is among the great places in the world to visit and play golf, and we are highly confident The PGA Centenary Course will showcase itself and Gleneagles well in The 2014 Ryder Cup matches,” says Nicklaus, in the foreword. “Given my association with Scotland and Gleneagles, it was a privilege and pleasure to have the opportunity to contribute a foreword for Ed. His book offers insightful reflection and a wonderful celebration of golf at Gleneagles.”

Jewel in the Glen: Gleneagles, Golf and The Ryder Cup by Ed Hodge is £25 and can be purchased from The Gleneagles Hotel, all leading bookshops and online. Also available to purchase direct from the publisher – Arena Sport, with free p&p at www.birlinn.co.uk

Book Reviews for Jewel in the Glen: Gleneagles, Golf and The Ryder Cup

‘This beautiful publication appears to match the majesty of Gleneagles itself and depict our wonderful game – and Samuel Ryder’s legacy – in the manner most deserving’ — Ken Schofield, former European Tour chief executive

‘An informative and entertaining read, it certainly whets the appetite for a great competition’ – Alex Salmond, Scotland’s First Minister