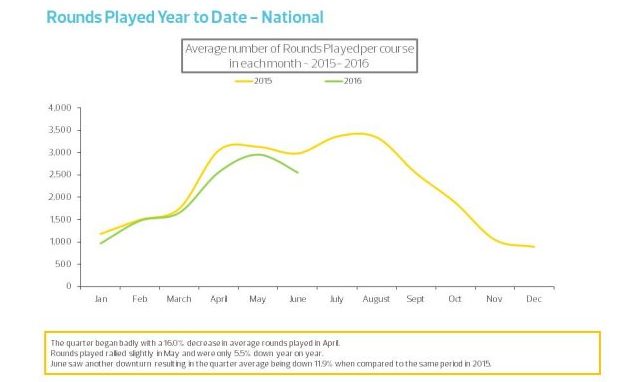 SMS INC. has confirmed that the tough start to the New Year in golf has continued and the average number of rounds played has decreased by 12% in the second quarter 2016, compared to the same period in 2015.

The weather in The UK during April was unsettled, with frequent showers and some longer spells of rain. It was mostly cold, bright and showery, and sleet and snow was unusually widespread at the end of the month, keeping people away from the golf course. Golfers will have kept away from the course still in June, when The UK saw 163% of average rainfall.

As well as the weather, it’s worth considering that The European football championships took place and Welsh clubs could have been affected due to the amazing success of the Welsh team. Due to the English team not making it quite so far, clubs in England should have been slightly less affected by this tournament!

Richard Payne, Senior Manager of Sports Accounts at SPORTS MARKETING SURVEYS INC. comments: “Considering the weather – we are not surprised at all by the decrease in Round Played. A fantastic summer of golf, and in particular a gold at The Olympics for Justin Rose in the golf will hopefully inspire more people to get golfing!”