Torrance and Livingstone Back Ryder Cup Support for Scottish Clubs 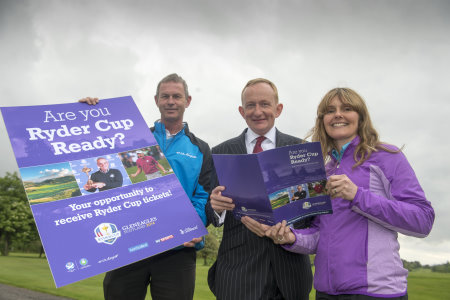 European Ryder Cup vice-captain Sam Torrance and Sky Sports presenter David Livingstone are backing a new Scottish Golf ‘Club Toolkit’ initiative which will encourage clubs to build a legacy from The 2014 Ryder Cup through access to coveted tickets for the event itself.

Making the announcement at Bathgate Golf Club, a venue synonymous with The Ryder Cup having produced two members in Eric Brown and Bernard Gallacher as captains, the Scottish Golf Union (SGU), Scottish Ladies’ Golfing Association (SLGA) and ClubGolf, in association with tourism agency VisitScotland, revealed that the country’s near 600 golf clubs would be given the opportunity to receive at least two tickets for The Ryder Cup at Gleneagles in September, to be used in developing the game at local level.

The ‘Ryder Cup Ready’ toolkit provides clubs and ClubGolf facilities with a guide featuring ideas on how to maximise the countdown to Scotland’s first Ryder Cup in 41 years, including building junior membership, retaining members, generating more clubhouse revenue, attracting new golfers and increasing visitor numbers. The Ryder Cup’s official broadcaster, Sky Sports, is also backing the club activity, through a special ‘6 months for the price of 4’ subscription offer and the chance to become one of Sky Sports’ ‘Ultimate Venues’ during the week of the event.

Clubs will be invited to apply for the tickets, which have been awarded by The Scottish Government as part of Scotland’s host nation allocation, based on running Ryder Cup themed activity in the run up to the event in late September and successful clubs will be rewarded with two tickets for match days and up to eight practice day tickets.

With match day tickets for the biennial event now sold out, the initiative will provide a unique opportunity for golfers in Scotland to attend one of the world’s biggest sporting events, with clubs encouraged to give golfers young and old the chance to get their hands on the tickets.

Sam Torrance, the victorious European Ryder Cup captain in 2002, who will be a key member of Paul McGinley’s backroom team at Gleneagles, welcomed the initiative: “The Ryder Cup Ready Club Toolkit is a great idea, as there’s no better time for clubs to showcase themselves amid the buzz of The Ryder Cup.

“It’s fantastic to see such as large proportion of tickets going to clubs across Scotland, giving the chance for club members to be part of what will be an amazing home crowd at Gleneagles.

“The practice days are also a fantastic spectacle and I’m sure those youngsters and volunteers attending will savour the experience and inspire them to stay involved in the game of golf with the chance to see the world’s best players in action.”

Cabinet Secretary for Commonwealth Games and Sport, Shona Robison, said: “With The Ryder Cup on the horizon, there has never been a better time for golf clubs across Scotland to raise their ambitions, increase their membership and make new offers to local communities and to visitors.

“The Scottish Government is backing this toolkit with Ryder Cup tickets to encourage clubs to capitalise on this great opportunity, leaving a lasting legacy from the Ryder Cup of vibrant clubs and more people enjoying golf.”

Hamish Grey, Chief Executive of the Scottish Golf Union, added: “The SGU and SLGA are hugely grateful to the Scottish Government as host nation, passing these tickets onto clubs and those involved at the grass roots of the game.

“We were keen to ensure that The Ryder Cup can provide a benefit to Scottish Golf at all levels and, through the ideas within the toolkit, we’re sure that clubs will make the most of this fantastic opportunity, whether that’s through a Ryder Cup theme day for all their members or an Open Day to attract new members.

“It’s also great to see those clubs involved in ClubGolf being rewarded, with the programme now making such a big impact to many clubs across the country, through growing their junior section’s membership.”

Four clubs across Scotland will be awarded the title of Sky Sports Ultimate Venue, each winning a 3D TV and a visit from The Ryder Cup trophy to their club for a day. These clubs will be selected based on running the most successful Ryder Cup themed activity during the summer.

“There is no doubt that the week of The Ryder Cup will deliver an influx of golfing visitors to Scotland but it is what we do before, during and after the event that will provide the lasting benefit to our golf industry. The toolkit outlines many ways in which golf clubs can capitalise on this enhanced exposure and benefit for many years to come, ensuring we maintain and build on Scotland’s reputation as the Home of Golf.

“We are delighted to have played a part in this toolkit through our partnership with both the SGU and SLGA and our strong relationship with Sky Sports and we look forward to welcoming the world to our golf clubs in 2014 and beyond.”

David Livingstone, Sky Sports Golf Presenter, added: “Sky Sports’ coverage of The Ryder Cup since 1995 has grown and developed dramatically with every edition and I feel privileged to be part of such a talented and knowledgeable team.

Further information on the Toolkit and the ticket allocation can be found here: http://www.scottishgolf.org/club-services/marketing/ryder-cup/