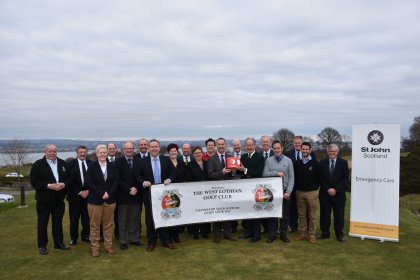 For a couple of hours on Tuesday afternoon West Lothian Golf Club near Linlithgow was perhaps the safest place in Scotland to be for anyone in danger of suffering a cardiac arrest. Thanks to the big-hearted generosity of the care charity St John Scotland, more than 20 life-saving defibrillators were on hand.

For a brief period, the vital units were in the same place at an event organised to distribute them to representatives of many of the clubs set to host Scottish Golf national championships in the coming months. West Lothian GC, for example, host the Global Golf Post Scottish Boys’ Under-16 Open Championship in July.

The host club were represented at the presentation event, along with representatives from 10 others who travelled from near and far to attend in person: Grangemouth, Murcar Links, Royal Aberdeen, West Kilbride, Royal Troon, Stranraer, Glasgow, Forrester Park, Aberdour and The Duke’s.

Thanks to a partnership with Scottish Golf launched in January 2015, St John Scotland gifted 20 defibrillators to clubs the length and breadth of the country for events last year. Now it is going two better, with clubs both large and small benefitting.

St John is also offering to fund training in the use of defibrillators, with sessions being organised on a local area basis, for staff and members from a number of neighbouring courses.

In parallel with the defibrillators for golf clubs project, there are local initiatives to supply the vital units to public places and communities.

The Prior of St John Scotland, Major General Mark Strudwick, said: “As one of the country’s leading caring charities, it is our mission to improve the safety, health and quality of life of people in our communities.

“Scotland’s golfing community is vibrant, but the course or the clubhouse can feel like very isolated places to anyone who suffers a heart attack. Defibrillators will save lives and we are very proud to be working with Scottish Golf to supply equipment and training, which will make all the difference until the medics or paramedics can take over.”

Andy Salmon, deputy chief executive of Scottish Golf, added: “Thanks to the continued support of St John Scotland, we’re delighted each golf club venue in Scotland hosting a Scottish Golf national championship in 2016 will be gifted a defibrillator. The outcome will be significant, positive golf club and community engagement and, above all else, could lead to the saving of lives at Scottish golf courses.”