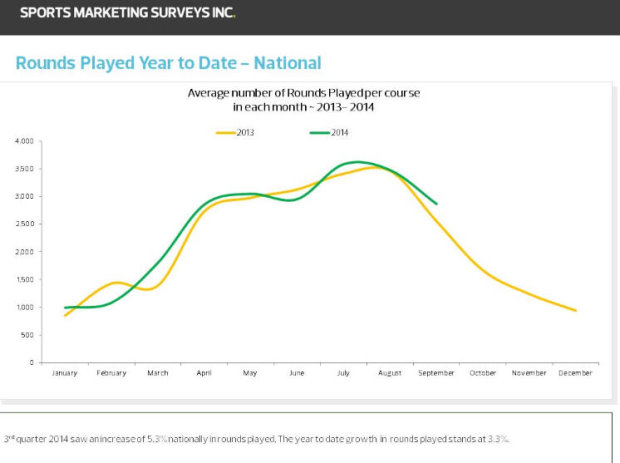 Despite a third quarter encompassing major sporting events hosted in the home nations, including the Commonwealth Games and the Ryder Cup, the number of golf rounds played were up by 5.3% in comparison to the same quarter in 2013.

The distraction of the Commonwealth Games in Glasgow in late July and August had an adverse effect on the amount of golf played in Scotland, which was the only region to be impaired by the event.

Despite this impact (in Scotland), the region quickly recovered and saw a surge in the amount of golf being played in August, conceivably enthused by the buzz of the Ryder Cup the following month.

September2014 was the driest on record since 1910 and with pleasant temperatures inciting golfers, coupled with no major sporting event to occupy golfer’s attention (with the concession of the Ryder Cup acting as a stimulus); the amount of golf played was up by 12.2% vis-à-vis September2013.

Richard Payne, Senior Manager of Sports Accounts at SMS INC. commented, “The amount of golf played in the third quarter was up across the UK in contrast to 2013. This gives us a year-to-date growth of 3.3%, so it will be interesting to see how we end up come late December.”

*Since 2000 SMS INC. has monitored the number of rounds of golf played in Great Britain, and had produced a renowned report ever since. The report monitors the rounds played at public access golf courses throughout mainland Great Britain.