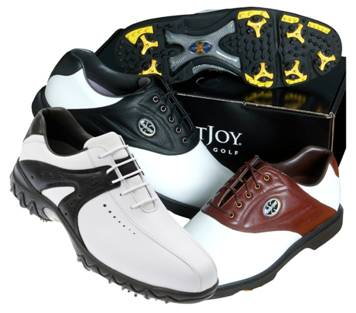 Foremost is overwhelmed to announce an unbelievable hike in shoe sales following the launch of their shoe trade-in scheme. Participating Elite Marketing Professionals (EMP) enjoyed a massive 19% rise in Footjoy and Adidas shoe sales for the month of April.

The results are quite remarkable, particularly when compared with non-participating industry statistics.

As stated, following the Footjoy and Adidas EMP shoe trade-in launch, participating stores are up a considerable 19% in sales on average. Significantly, this increase in sales is in addition to the 30% sales upsurge generated by a similar Foremost promotion in 2010. This growth on growth has resulted in a huge upturn for EMP professionals.

This promotion has not only increased Footjoy and Adidas sales, but it has moved the customers into a higher price point. Notably, Adidas shoe sales are up 61% on April 2010 for EMP pros, with Footjoy climbing by 16% on top of the 30% sales hike in April 2010 as a result of a separate promotion.

The benefits for EMP pros are obvious, as non-participating professionals experienced no growth in Adidas sales from last year. Additionally, the Footjoy sales outside the EMP accounts for April are stable at best.

Speaking of his recent success, Ian Bamborough of Gog Magog Golf Club, said: “It’s been an incredible month. My Footjoy sales have basically doubled with 46 pairs of FootJoy shoes sold in April versus 23 pairs sold for the same period last year. This took my shoe sales with just FootJoy over £3,000 for the month and this is all thanks to the shoe trade-in.”

Echoing Ian’s thoughts, Brian Barton of Copt Heath Golf Club, who experienced an unbelievable 268% rise in Footjoy sales, said: “I simply cannot believe how successful this promotion has been. The benefits of becoming an EMP professional are there for all to see.

“In April last year I made £400 from Footjoy sales, this year I’ve made £1,400! These results make such a difference to my business.”

Underlining the clear success of the promotion, there were other fantastic sales figures for Kenny Findlater at Garforth Golf Club, who was up 234% on Footjoy sales. Philip Davis at Saffron Walden Golf Club also increased his Footjoy sales by 106%.