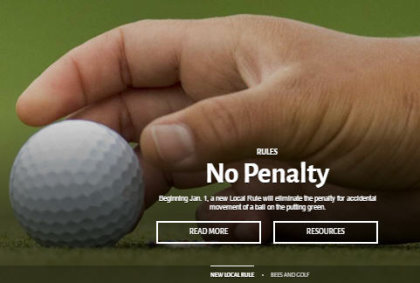 The R&A and the USGA have announced the introduction of a new Local Rule that eliminates the penalty when a ball is accidentally moved on the putting green.

The Local Rule will be available for any committee in charge of a competition to use starting 1 January 2017. It will be adopted by The R&A and the USGA in all of their championships, qualifying competitions and international matches.

David Rickman, Executive Director – Governance at The R&A, said, “For the past several years, as part of The R&A and USGA’s Rules Modernisation initiative, we have considered the penalty for a ball that is accidentally moved on the putting green. Both Rules Committees agreed that it needed to be changed and decided that in this particular case it was important to act now, through a Local Rule, rather than wait for the next overall set of revisions to the Rules of Golf.”

Thomas Pagel, Senior Director, Rules of Golf and Amateur Status at the USGA, said, “Eliminating this penalty responds to the concerns we have heard from both golfers and committees about the difficulties in applying the current Rules when a player accidentally causes a ball to move on the putting green. This change is a good example of the type of Rules Modernisation changes we hope to implement after completing our fundamental review of all of the Rules. We are looking for ways to improve the Rules by making them easier to understand and apply.”

The Local Rule has been welcomed by all of the major Tours worldwide, and the PGA TOUR, European Tour, LPGA, PGA of America and the Masters Tournament are among the golf organisations that will implement the Local Rule for all future events, beginning 1 January 2017.

If a Committee wishes to introduce this Local Rule, the following wording is recommended:

When a player’s ball lies on the putting green, there is no penalty if the ball or ball-marker is accidentally moved by the player, his partner, his opponent, or any of their caddies or equipment.

This Local Rule applies only when the player’s ball or ball-marker lies on the putting green and any movement is accidental.

Note: If it is determined that a player’s ball on the putting green was moved as a result of wind, water or some other natural cause such as the effects of gravity, the ball must be played as it lies from its new location. A ball-marker moved in such circumstances is replaced.