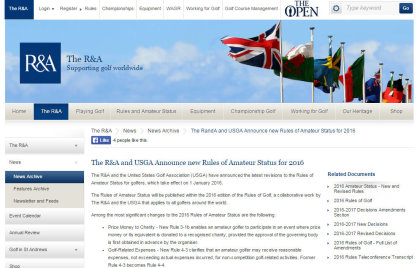 The R&A and the United States Golf Association (USGA) have announced the latest revisions to the Rules of Amateur Status for golfers, which take effect on 1 January 2016.

The Rules of Amateur Status will be published within the 2016 edition of the Rules of Golf, a collaborative work by The R&A and the USGA that applies to all golfers around the world.

Among the most significant changes to the 2016 Rules of Amateur Status are the following:

David Rickman, The R&A’s Executive Director of Rules and Equipment Standards, said, “After the fundamental review of Amateurism conducted in the previous Rules cycle we have had a period of consolidation and have continued to develop the uniform Code. The new Code provides flexibility in terms of supporting recognised charitable causes, while remaining faithful to the principles of Amateurism.

Thomas Pagel, Senior Director of Rules of Golf at the USGA, said, “The new Amateur Code continues to provide appropriate limits and restrictions to encourage the amateur golfer to focus on the challenge of the sport, rather than on any financial gains. We also want to make it easier for golfers to return to the amateur sport if they no longer wish to play professionally.”

Until now, an amateur golfer has been prohibited in all respects from playing for prize money or its equivalent in a match, competition or exhibition. However, from 1 January 2016, under new Rule 3-1b, an amateur golfer will be able to participate in an event where prize money is offered and donate any winnings to a pre-determined recognised charity, provided the approval of the governing body is obtained in advance by the organiser of the event.

This change has been made to reflect the growing number of charitable golf exhibitions organised around the world in aid of worthwhile causes and disaster relief agencies.  As long as the organiser seeks prior approval from the governing body, an amateur golfer may donate any prize money to the identified charitable cause without compromising their Amateur Status.

For the full text of the 2016 Rules of Amateur Status, please click here.