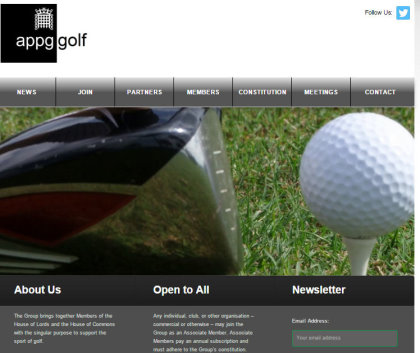 The Parliamentary Golf Group held its first open meeting on the evening of Tuesday 19 January.

Peers and MPs were joined by Associate Members in the Palace of Westminster and the floor was made open to any and all who wanted to raise an issue or make a point about the game.

The lively debate that followed focused on the perception of golf, access for those wanting to play, and matters around club financing, specifically taxation and the role and use of the Community Amateur Sport Club scheme.

The meeting was chaired by Group Chairman, the Member of Parliament for the City of Lincoln, Karl McCartney. Speaking afterwards he said, “As a first meeting of an All-Party Parliamentary Group, that was excellent. We heard from a range of Associate Members who are obviously all very passionate about the game and it has already given us a lot to consider when we look to the areas where we can channel our efforts to support golf. My initial intention is to concentrate on both the perception of, and participation in, golf. Golf is a sport for all that needs to let everyone know they are welcome to play and to continue to play throughout their lives.”

Having spent the previous few months gathering information from different sources, from stakeholder groups involved in the game to players and fans who wrote in to the Group’s website, the Group will decide on those issues where it feels it can make most difference and begin acting on those areas before the next meeting on Monday 18 April in Westminster.