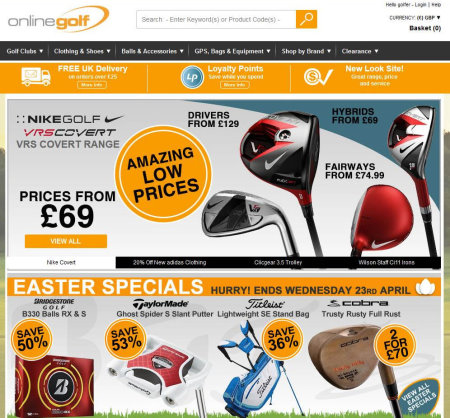 Neatly wrapped around the biggest golf major of the year, and ‘officially’ beginning the 2014 season, Easter Weekend is a huge time for golf retail.

Centered on a four day period well known for getting players out on the greens and playing a few extra rounds, the holiday brings to the front of people’s minds the need for an equipment upgrade or some new season clothing to better suit the warmer weather.

“We see a massive spike in sales every Easter weekend highlighting the start of the season and the renewed interest in golf is sparked by the first major of the year and the extra time a 4 day weekend gives you – conversion rates and overall revenue increase is close to double across the OnlineGolf websites!” explains James Duggan, Online Marketing Manager for OnlineGolf.

And he’s right. Frequent visitors to golf courses will benefit hugely from the extra days they have to enjoy the game, and after watching the Masters unfolding around the same time, will be influenced to revamp their equipment for the new season – a tradition which works to the benefit of all parties. It’s a healthy rise which shows clear indications that more casual golfers and those with a general interest in the sport are inspired by the interest generated by events such as the Masters and other major events in the golfing calendar.

Easter Weekend is a glorious occasion for golf, helping to boost players’ time on the greens and giving companies greater visibility during a peak time of the year. For example, OnlineGolf sees conversion rate increasing by close to 2 times its normal average, with average basket value up almost a quarter and conversion rate tipping the scales at more than 100% increase compared to ‘normal’ weekends.

Of course it also helps that the springtime holiday is considered by many to be the beginning of the golf season – giving players the opportunity to restock or upgrade a set of golf clubs – and in turn helping golf retail companies continue their growth at the beginning of the season. For frequent course-goers, the Easter Weekend means they are able to reap the benefits of an extended round or two on the greens.

OnlineGolf have been saving golfers’ money since 1999. Since then they have grown into one of the largest online-only golf retailers in the UK & Europe. As well as being established for over 15 years in the UK, they have fast growing local currency websites in Euro’s, Krone & Krona. As well as rapidly expanding French & Italian sites to sit alongside their already established German store.