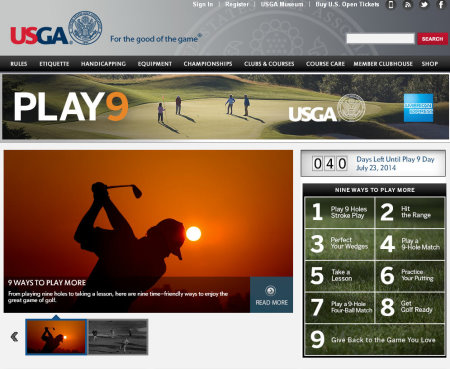 The United States Golf Association (USGA), together with American Express, has launched the “Play 9” program to demonstrate how nine-hole rounds can help more golfers enjoy the game in less time.

“I don’t always have enough time to play a full round between practice and spending time with friends and family,” said Fowler. “I’m happy to join the USGA and American Express on ‘Play 9’ to encourage golfers to play a nine-hole round, especially if that’s what’s going to get them out onto the golf course to play more often.”

At the forefront of the USGA’s multi-year commitment to promote “Play 9” is the first annual “Play 9 Day” on Wednesday, July 23, when all golfers will be encouraged to play a nine-hole round. The program builds on the organization’s ongoing efforts to make the game more accessible, sensitive to time considerations and sustainable.

“During our extensive conversations with golfers, we’ve learned that they feel challenged by the time it takes to play,” said Mike Davis, executive director of the USGA. “By creating awareness of the nine-hole round, and the many ways that one can enjoy the game in less time, we hope this creative program featuring one of the game’s more dynamic and progressive players will energize and remind golfers how they can fit the game into their days.”

“American Express is excited to partner with the USGA and Rickie Fowler to support the game by encouraging more people to play nine-hole rounds,” said Deborah Curtis, vice president of sports and entertainment marketing at American Express. “With their support, we want ‘Play 9’ to demonstrate how golf can fit into the everyday lives of players – giving golfers everywhere a chance to play more often.”

Industry research indicates there is growing interest in this format of play. According to the National Golf Foundation, 27 percent – more than 4,000 – of America’s courses are nine-hole facilities. In addition, nine-hole rounds can be played at most 18-hole public facilities. However, just 24 percent of total rounds played last year, among those surveyed, were nine-hole rounds.

The “Play 9” program will provide golfers and golf courses with resources that will allow them to celebrate the nine-hole round and the game in a variety of ways, including finding time to enjoy a nine-hole match with friends and post an official score, or even take a lesson.

To view the PSA and to learn more, visit www.usga.org/play9

A downloadable version of the PSA is available at vimeo.com; password: play9