The Maracanã Stadium: the natural home for golf in Brazil 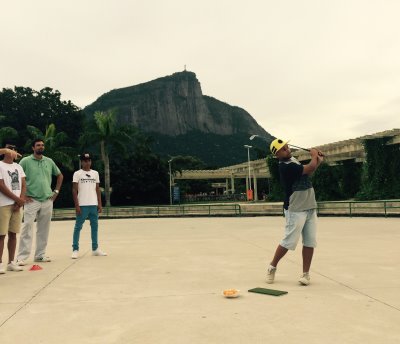 Pele’s 1,000th goal, Pope John Paul II’s largest ever open air Catholic mass and the parading of the legendary Garrincha’s ashes; Rio de Janeiro’s Maracanã stadium appeared to have seen it all. But then along came Rio StreetGolf.

On 6th May 15 kids from Japeri, one of the poorest communities in the whole of Rio State, became the first people ever to play golf in football’s spiritual home.

Supported by The R&A and the Golf Foundation and the Rio Golf Federation, this group of 10-14 year old boys and girls swung golf clubs in the stadium graced by so many of their heroes.

Rio StreetGolf is a schools and communities social legacy project, designed to change perceptions, breakdown sporting and social barriers and highlight the key values of golf – honesty, respect and integrity. 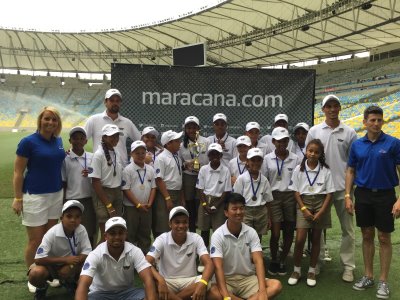 “It is brilliant to be able to teach golf to kids from my community in the home of my favourite football team; Flamengo!” said Cristian Barcelos, 20, who two years ago became the first Brazilian ever from outside a private members’ club to win the Brazilian Junior Golf Championships.

Cristian and fellow Japeri resident Breno Dominjos are two of the five-man Brazilian team being trained by the Golf Foundation to deliver StreetGolf to kids across Rio.

For many of Cristian’s neighbours in Japeri, he offers a real life example of the unlikely things that can be achieved. “No one believed that we were going to play golf in the Maracanã,” Cristian laughed.

Two members of the Golf Foundation are in Rio for 10 days to launch the 12-month Rio StreetGolf Programme, which will see more than 15,000 kids and adults play StreetGolf through a mixture of schools and communities programmes and four high profile StreetGolf tournaments – to be played in central Rio de Janeiro.

“This a really strong project for increasing awareness of golf in Rio de Janeiro and showing people from all backgrounds that this is a sport that is accessible to them,” said Luiz Henrique Lopes Leão Teixeira, President of the Rio Golf Federation.

Cristian and his friends, guided by the experts from the Golf Foundation, have spent the week teaching kids in schools and communities, including Mangueira, the favela overlooking the famous stadium.

The team will shortly start weekly training sessions at schools and communities across Rio, building towards the first public StreetGolf Tournament on 5th August 2015 – the one year countdown to golf’s return to the Olympic Games after a 100-year absence.

“No one in England can understand what it is like to watch these kids play golf in the Maracanã!” said Golf Foundation development officer Katie Moggan. “This is a fantastic event and the start of showing young people in Rio de Janeiro that they can play golf if they want to and it’s a sport that does have something to offer everyone.”