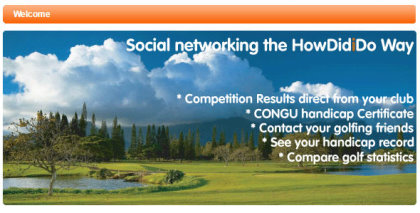 To misquote Mark Twain, reports of golf’s demise have been greatly exaggerated. While there may be a downturn in the number of members at UK&I golf clubs, conversely the number of competitive rounds at clubs is on the increase. That’s the findings of HowDidiDo, Europe’s largest golfing community, which holds the handicaps, results and scores of more than 1,300,000 UK golf club members.

In total, there was an overall four per cent increase in the number of competition rounds played by HowDidiDo club members in 2015, up to 5,031,056.

Barry Dyett, managing director of HowDidiDo, believes the figures indicate a move to more club golfers playing competitions – but of the Stableford variety in preference to medal rounds.

He said: “While there is still an increase in the number of medal rounds being played, the drift towards Stableford is more noticeable as the gap between the two closes. What’s more, compared with 2013, there were around 11,000 fewer medal rounds played, but almost 200,000 more Stableford rounds – that’s a considerable swing.”

HowDidiDo is Europe’s largest golfing community, holding in excess of 21 million rounds of golf along with the handicaps, results and scores of more than 1,300,000 UK golf club members, with more than 460,000 golfers currently using the website.

Nearly 2,000 golf clubs currently use the HowDidiDo system, allowing members to analyse their game and compare performance with other players – at their own club or across the entire HowDidiDo network. It is also used for official CONGU handicapping and competition results.

HowDidiDo, in association with the Daily Telegraph, is also currently engaged in a widespread campaign with the BOSS Watches H1Club to reward all its registered golfers with a luxury timepiece should they record a hole-in-one during an official club competition.

It also powers the annual Titleist Order of Merit, the largest golf event of its kind in the country, which now sees more than 20,000 golfers take part each year – making it one of the UK’s most subscribed sporting competitions, behind only events like the London Marathon and Great North Run – and the Morocco Matchplay, a UK singles and pairs competition culminating in a grand final in the North African country, in February.