SNAG Pivotal in “Year of Golf” in Flanders/Belgium 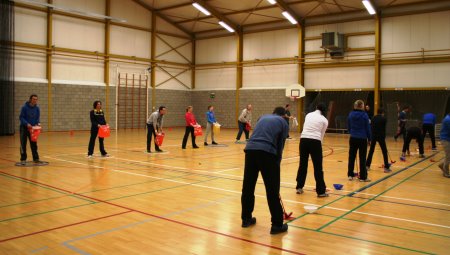 2013 proved to be fantastic year for i-KAN GC with its SNAG (Starting New At Golf) system, and for development of the game of golf in general. One of the best examples of this, and perhaps the jewel in the crown, was the successes achieved in just a year within Flanders/Belgium.

The Golf Federation of Flanders were proud to announce that golf was declared ‘sport of the year for 2013’. The decision taken by the regions minister of Sports, and their department BLOSO, meant that golf was advertised throughout the whole year and received extra support from the Flemish government.

The Golf Federation and the Department of Sport together scheduled a series of activities for people of all ages, gender and cultures in a bid to spread the word about the wonderful game and grow participation levels. SNAG, of course, has been there to help every step of the way.

The results achieved are truly astonishing.

Through various activities an impressive 215,000 non-golfers hit their first ball in 2013 and were thereby introduced to the game. 150,000 children participated via “Golf at School” and 15,000 people got involved in the “Golf on the Road” project. A further 50,000 people participated via “Start to Golf”, 4,350 of these were visitors to over 35 golf clubs which were involved in the programme,13% of these visitors bought a package of lessons on the day at the clubs. 2,000 visitors joined in at 15 city parks for “Golf in the Park”.

In total 350,000 people with no previous knowledge of the game now know about golf and 30% more “Start to Golf-packages” were sold in Belgium. The ‘Become a Golfer’ project, which involved Sport Clubs in Flanders, ran with a 4 lesson series including both juniors and seniors. These are just a few examples of projects completed in 2013 by the Golf Federation of Flanders. They literally took golf everywhere and to everyone resulting in unbelievable success The figures are made all the more impressive considering the region has a population of only 6 million.

SNAG Europe was pleased to have their products involved as an initiative and training tool to assist in the project for 2013. With over 700 school teachers being trained with SNAG and 20 golf players at first level PGA Professional status also being trained to become initiators, SNAG has certainly played its part throughout the year. SNAG will also be part of the golf legacy to come, many schools now have the equipment providing a crucial ongoing structure for Belgium and the Flanders region.

“In this special year, where golf was elected as Sport of the year in Flanders, SNAG was crucial for success in the activities within the promotion campaign. SNAG is also a key factor in the long term, because it will help us to achieve our goal to reach 100.000 children every year via the Golf at school-project,” stated Marc Verneirt, Secretary General VVG (Golf Federation Flanders).

The Golf federation of Flanders has proven that by bringing together key organisations, and with the right initiatives, products, determination and training, it is possible to make a massive difference to how many people are introduced to the game of golf. i-KAN GC who provided the SNAG equipment are dedicated to growing participation in golf by creating an environment that provides easy access for all. SNAG provides a pathway and structure that enables players to learn and have fun so they can enjoy a lifetime in golf, this is exactly what has been achieved in Belgium.