Ryder Cup star Rafa Cabrera Bello took some time out from his busy globe-trotting schedule to put something back into a game that has given him so much when he delighted children at the Sheikh Rashid School for Boys in Dubai with a golf lesson earlier this week (Wednesday).

He’s been hitting the heights all season but the 2012 Omega Dubai Desert Classic winner, who hasn’t missed a cut in competitive golf for more than a year, is known as one of the most down to earth and good-natured players on the European Tour and he proved it by passing on some of his knowledge to the eager schoolchildren during some down time in the emirate he calls his ‘second home.’ 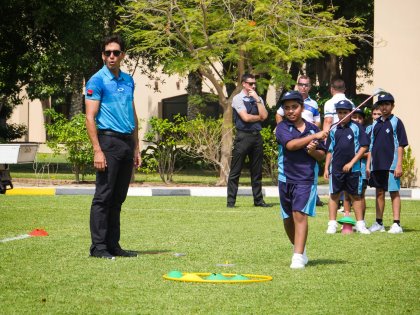 “Just watching the kids smile really makes my day! I’m very happy to be given the opportunity to be here and watch the kids play the game for the very first time and to see how excited they are and how they interact with their classmates,” said the Spaniard who spent over an hour teaching the enthralled pupils the basics of the game as part of an initiative by the Emirates Golf Federation supported by the European Tour and DP World which will see over 6,000 schoolchildren given ‘introduction to golf’ lessons by the end of the year.

“I think this initiative is a great idea in getting golf into the PE classes. This misconception that golf is for old men and non-athletic people is blown out of the way with an initiative like this. If the schools have the space and capacity to implement this initiative, then I think they should go for it. It will do lots of good for the sport and in this region.”

Adel Zarouni, Vice Chairman of the Emirates Golf Federation said: “We aim to spread the game of golf into schools in the UAE attracting young boys who in future will hopefully be very good golfers. With kids, you need something to inspire them, something to give them that extra push. Golf is not a big sport within the UAE; it’s mostly played by expats here, so it’s not spread at all in the schools. But this is a way for us to break through and naturally they like Rafa, he’s an inspiration for a lot of people. The most important thing is that it opens up the doors for us to go to these schools because the schools want a serious initiative and you can’t find somebody bigger than a Ryder Cup player. I think Rafa is helping us a lot to get through to the schools and reach the kids.”

Dr Abdulla Al Karam, Director General and Chairman of the Board of Directors of the Knowledge and Human Development Authority (KHDA) said: “Having Ryder Cup stars like Rafa here is what we’ve been missing before. The EGF, European Tour and DP World have done great work to involve kids but now we are getting parents engaged and professionals involved. The kids might not know the professional but the parents certainly will.”

Cabrera Bello endeared himself to golf fans around the world with an inspiring Ryder Cup debut at Hazeltine National Golf Club in Minnesota earlier this month, scoring two and a half points from three and forming a devastating partnership alongside fellow countryman Sergio Garcia.

Europe may have lost the biennial contest against the USA for the first time in eight years but Cabrera Bello, who also represented Spain in the Olympic Games this summer, emerged as one of the shining lights of Darren Clarke’s European Team.

“It was probably the best week in my career! I would trade my two wins on the European Tour for a win in The Ryder Cup,” he said. “The team went to the tournament as friends before but our bond got even stronger after the tournament. We fought as hard as we could and we gave it all for the captain, for the team and for Europe. Obviously we were disappointed that we didn’t win but personally I was pleased with my performance and contribution to the team. As a Ryder Cup rookie I can say that the experience itself is greater than winning or losing.

“The Olympics was also great – to be able to represent my country was something special. All of the people back home in Spain were watching me play, whether they followed golf or not. It was a huge honour and also a big responsibility which I took very seriously and with great pride.”

The schedule of a top level golfer is such a hectic and exhilarating one and the big tournaments are set to continue coming thick and fast for Cabrera Bello over the coming weeks. He’s off to play on the US PGA Tour’s CIMB Classic in Kuala Lumpur next week and then it’s back on to the European Tour for the Final Series of the Race to Dubai – he’s currently in fifth place in the rankings – which culminates in the US$8 million season-ending DP World Tour Championship taking place at Jumeirah Golf Estates from Thursday 17 to Sunday 20 November.

After that, he’s heading to Australia to compete in the World Cup so it’s little wonder that he factored in a short break in one of his favourite cities to recharge the batteries.

“It’s very important to rest,” said the JA Resorts and Hotels Ambassador who also made time to give a golf clinic Jebel Ali Golf Resort during his visit to Dubai. “I call it the ‘invisible training’ – you feel like you’re doing nothing but you actually are doing something. Even if we were machines we’d still need our maintenance periods. You need to take your mind of golf for a while, just relax, lie down, do your hobbies and gain some happiness from something besides golf and there aren’t many places better to do that than here in Dubai.

“The events coming up are all big events of significant importance and if you win one of them it will have a big impact on your Race to Dubai ranking,” continued Cabrera-Bello who is set to be spending more time in the Dubai in the future having just got engaged to Sofia Lundstedt who works for the European Tour’s regional office.

“I’ve got myself into a position this season where if I win one of those events I will be contending for the Race to Dubai title. There are four very big events coming up and I will play in all four of them to give myself the best possible chance.

“I’m really looking forward it and if I could end the season with victory at the DP World Tour Championship it would be like double icing on the cake for me.”

He’s got a career that most people can only dream of but in giving up his time to introduce the game to a new generation in Dubai, Cabrera Bello might just have lit the fuse that will help one of them follow in his footsteps.