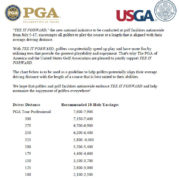 Golfers in USA are being introduced to the ‘TEE IT FORWARD’ scheme which encourages golf facilities to set tee boxes forward to match the ability of amateurs.

PGA chief executive Sandy Jones has welcomed the idea, which is being piloted by the PGA of America and the United States Golf Association. He sees it as a means of improving the game, speeding up pace of play and attracting new enthusiasts to the sport.

He said: “The PGA fully endorses this initiative to encourage golfers to play the course at a length better suited to their game. It will not just boost many golfers’ enjoyment of the game but also addresses two of the bugbears frequently cited as problems in the game – ¬time taken to play a round of golf and the pace of play.

“I think realistically, the average club player should be thinking about playing courses in the region of 6,000-6,200 yards maximum. For example, it doesn’t make sense to have higher handicap players tackling 450-yard par fours when they’ve got no chance of reaching it in two.

“We will be monitoring TEE IT FORWARD with interest and would be delighted if our colleagues in the Home Unions, golf course managers and greenkeepers alike, all joined with us in supporting this initiative as we firmly believe it would increase the enjoyment for many club golfers and newcomers to the game.”

Facilities across the United States are being encouraged to adopt the TEE IT FORWARD programme between July 5-17 and to date more than 2,100 have registered.

The move would see course yardages in line with the average driving distance for amateurs, meaning they would be 6,000-6,200 yards long.

Barney Adams, the founder of Adams Golf, provided the concept that led to TEE IT FORWARD. By playing from forward tees, amateur golfers have the chance to play the course at the same relative distance as a touring professional would over 18 holes. The playing field is leveled by giving golfers the opportunity to play from distances that are properly aligned with their abilities.

With many more golfers hitting approach shots with 6- and 7-irons instead of hybrids and long irons, their chances for enjoyment increase. Also, playing from forward tees should result in fewer overall shots, shorter distance travelled on each hole, and potentially, fewer lost balls.

The rationale behind the initiative is supported by evidence from former USGA technical director Frank Thomas. This stems from a report he produced in 2005 that found the average drive for a mid to high handicapper male is just 192 yards while the distance for women, averaging 95-100 a round, is 145 yards.

Thomas concluded: “Golfers want to be challenged but the challenge must be an appropriate one. Having a facility that caters for and is defined by what a golfer aspires to be, or once was, only leads to frustration and disappointment.”

Jack Nicklaus is a proponent of TEE IT FORWARD.

“I love the game of golf but I will be the first to tell you that there are things about our game we need to improve,” Nicklaus said. “Now The PGA of America and the USGA have come together to develop ways to that can make the game more attractive and more enjoyable. TEE IT FORWARD is the first of many initiatives we have discussed together, and I think families around the country will enjoy alternate formats like this to make the game more fun.

“All of us deeply involved in the game constantly encourage golfers of all skill levels to play the proper tees, but too often golfers want to bite off as much of the golf course as they can. What ends up suffering is their scorecard and their overall enjoyment. This program should help stimulate people to play the proper tees and maximize the golf experience.”