Padraig Harrington has received the Golf Foundation’s ‘Spirit of Golf’ Award at Wentworth in recognition of his ‘outstanding contribution’ to the sport and for inspiring so many young players over the years.

The Golf Foundation is the child-centred national charity that through its HSBC Golf Roots programme helps young people from all backgrounds to enjoy the playing and personal benefits of the sport.

The Foundation believes Harrington is a player who truly embodies the ‘Skills for Life’ attributes of the game such as resilience, respect and sportsmanship, which are among values inherent within all Golf Foundation programmes that see more and more new children playing golf in schools, communities and golf clubs. 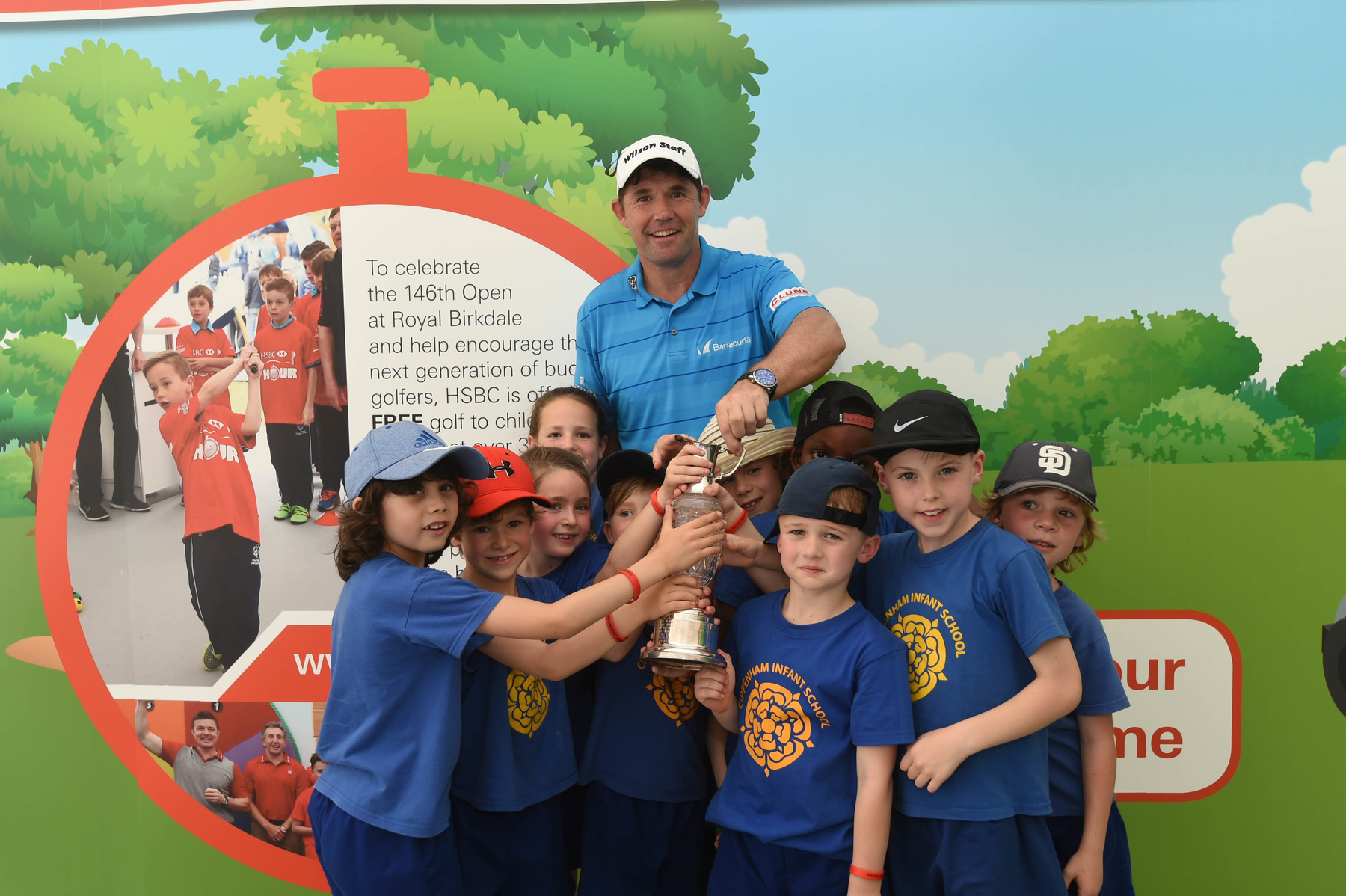 Foundation Chairman Stephen Lewis presented Harrington with the award during the BMW PGA Championship. He said: “Padraig has always played the game with huge focus and hard work to back up his talent, but right alongside this has always been that great attitude, a smile on his face and an appreciation of the value of sportsmanship. His strong intelligence and articulate reasoning have also helped him in his consistent work for the good of the sport and for charities, and this has been an outstanding contribution to golf.

“Padraig has inspired so many young people to play golf in just the right way. The example he sets on the golf course encourages all of us to play the game with spirit, fun and integrity.”

Padraig celebrated earning the accolade by captaining a team of local youngsters in a special ‘Tri-Golf’ match in Wentworth’s Spectator Village on Thursday, 25 May. Tri-Golf is just one of the charity’s fun formats which are successfully encouraging children along a pathway from school to regular club golf (‘Start, Learn and Stay’), and Padraig clearly relished the experience and enjoyed answering questions from the girls and boys, from Cippenham Infants School in Slough.

On being presented with the award Padraig Harrington said: “As professional golfers we are usually judged on our tour successes, but I’m honoured to receive this award because it’s about the manner in which we play the game.

“Ever since I was a boy I have always tried to follow the true spirit of golf, to play the game in the right way and to respect my opponents and the golf course at all times. I fix every pitch-mark, replace every divot and never lose my temper, whilst enjoying the challenge that the game provides.

“Golf is a wonderful sport for youngsters – you can be big or small, a boy or a girl and all can be competitive. Golf can also help develop many good attributes through the way it is played and the etiquette. I love team sports but in golf you are on your own, learning to control your emotions and adhering to the rules, which can all help shape character. I love the game and hope I can encourage young people to take it up.”

Away from the golf course, where he has so far netted three Majors (including back-to-back Open Championships and the USPGA Championship), played in six Ryder Cup matches and enjoyed a total of 27 other victories around the world, Padraig devotes time to generating awareness and raising funds for good causes.

He runs his own Charitable Foundation, which supports deserving beneficiaries in Ireland and internationally, and supports the junior game as part of his role as an R&A Working for Golf Ambassador and as a Global Ambassador for the Special Olympics. Padraig is also a patron of the Irish charity, the Oesophageal Cancer Fund.

The silver and glass Spirit of Golf Award trophy was specially crafted for the Golf Foundation, provided by Derrick Burridge of London.