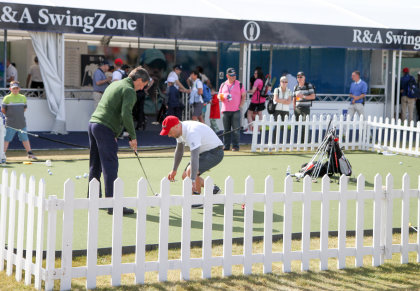 PGA Professional Tom Gibbs was like a kid in a sweet shop at Royal Troon during Open Championship week. The 3 Hammers Golf Centre pro from Wolverhampton was part of the 23-strong team of PGA coaches who gave close to 3,000 free lessons during The Open at the R&A SwingZone.

Gibbs personally teed up 150 lessons to a cohort of golfers of all ages and abilities including an ex-British Boys champion from the 1980s while along the way he indulged his passion for coaching by getting a close up of some of the finest exponents of the art such as Butch Harmon and Sean Foley – Tiger Woods’ ex-coach and now coach to Justin Rose.

“It was great to see the tour players, get on the practice range and have a look at them close up, see how the guys go about it on the course, their game management, warming up and the different things you don’t normally see on TV,” he said. “I got the chance to pick Sean Foley’s brains and ask about a couple of drills we’ve seen on the range, so I picked up lots of things.”

But like all the coaches, it was the 15 minutes inspiring and encouraging golfers that flocked to the R&A SwingZone that really struck a chord with Gibbs.

“You want to give them a little nugget that they can go away with to improve their game but also get them enthuses and wanting to play more golf,” he added. “A highlight for me was teaching a guy called Max from the US. He was over here playing golf all over the place. He’d shot 94 on one course and took great delight in coming back to me telling me he’d shot 76 after a 15 minute lesson.

“And all week we kept getting people coming back, doffing their cap and saying how the lesson has made a difference so it’s amazing what you can do in 15 minutes.”

Another of the stalwart coaches was Denise Hastings who runs golf schools in both Europe and America as well as The Bedfordshire and Kingsway golf clubs.

She played eight years on the Ladies European Tour but coaching at Open weeks remain a highlight.

“It’s one of the best weeks of the year, working with a great bunch of pros and just the whole experience,” she said. “We see so many different people and nationalities – we’ve had Spanish, Americans, Canadians, I had a Lithuanian lady, a Belgian. It’s just fun to see people go away after 15 minutes thinking ‘cor, that’s good, I feel better’.

“You can’t really see the ball flight in the nets but if you send someone away with one or two ideas on how to improve their golf then it’s spot on. I had eight years on tour and this is like giving something back, I’ve been lucky, I’ve had a good career and this to me, it’s almost better than playing.”

Visit www.PGA.info for the latest information and scores throughout the season