Newport BME Groups Get Into Golf

Hundreds of people from a Black and Minority Ethnic background have been given the chance to try golf in Newport, the home of the 2010 Ryder Cup.

With around two in every hundred golf club members in Wales coming from a BME background, Golf Development Wales have targeted the issue with £10,000 Kick Start funding from the Equality and Human Rights Commission.

More than a thousand people took advantage of 30 sessions in schools as well as 50 ‘pop-up’ golf sessions where coaches would arrive in areas known for anti-social behaviour, open up a bag full of golf equipment and engage with the young people to decrease the opportunities for distraction.

The project has been described as a ‘great success’ which ‘ truly inspired BME community residents,’ by Newport Live. 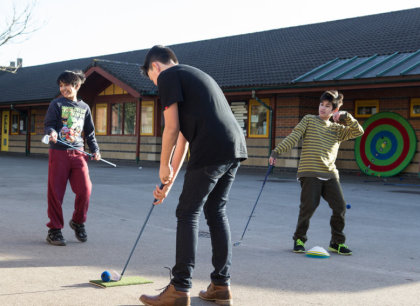 More than half of those who took part were from BME backgrounds, while two thirds of those engaged were from Communities First areas and a third were young people not in education, employment or training (NEETs).

Chris Emsley the project lead from Golf Development Wales, explained “We were delighted with the impact the scheme had in Newport for communities who are not normally associated with golf.

“While there is a certain image about some golf clubs, golf is a sport that can be enjoyed by anyone from any background and this project helped to show that – with special thanks to the support of Leigh Williams at Newport Live.

“Thanks to the EHRC funding and the support of the Parc Golf Club (Golf Foundation HSBC Golf Roots Centre) and coaches, we were able to run 46 pop up sessions, one celebration event and 30 planned sessions covering 10 different sites around the area.

“We were able to identify that latent demand for golf is substantially higher than the active participation and the diverse population of Newport made it a good place to offer those opportunities.

“By increasing participation we aimed to improve links to membership of clubs and also to increase the number of level one coaches to sustain the sport in those communities.

“We showed golf can encourage participation and popularity in all communities, using it as a tool to break down barriers and create sustainable relationships.

“We used local BME role models to promote the sessions, which was done through social media, the BME forum and knocking doors!

“These role models have included some of Newport Live’s registered coaches, three of whom have completed both an Activators course and a Junior Leaders Workshop and have been registered to complete a Level 1 in May.”

Parc Golf Club Professional Joe Vickery added, “We’ve run pop up sessions in caged off play areas and car parks across the community, where we expose the kids to golf through more familiar sports such as trying to hit golf balls into the basketball hoops and we generally end with a game of football.

“In this group there are some kids who already are showing a natural talent and we’d like to get these kids along to nurture that talent.”

There were 18 Street Golf Activators (10 BME), 13 Junior Golf Leaders (7 BME), 6 registered ASQ Level 1 candidates (6 BME), who were consistent throughout to develop relationships and mentoring of the workforce.

“The pop up golf project lead by Golf Union Wales was the first real opportunity for BME communities across Newport to access and engage in the sport,” said Asa Waite, Assistant Positive Futures Development Officer for Newport Live.

“The project has a good mix of local BME volunteers and coaches delivered the sessions alongside local professional golfers like Joe Vickery.

“The street golf equipment is perfect to engage a wide range of different ages, genders and abilities.

“Young people are encouraged to be creative with the equipment, using their surroundings and the equipment we progressed groups from chipping in to a bin, to using recycled cans as targets, the sessions took place in local community centres, open fields, schools and local parks.

“The sessions have truly inspired BME community residents to look outside the box when it comes to sport.

Leigh Williams, Sport and Physical Activity Development Officer for Newport Live, said, “The project has been a great success and allowed typically under-represented groups in terms of sporting participation across the City to access structured golf within their local communities.”

Lumine Golf Club has been announced as ‘Europe’s Best Golf Venue’ at the World Golf Awards for the second consecutive year.

The UK government has announced that travellers returning from Cyprus from 4am GMT on Sunday (November 1) must self-isolate for two weeks under the latest updates to Covid-19 travel regulations.