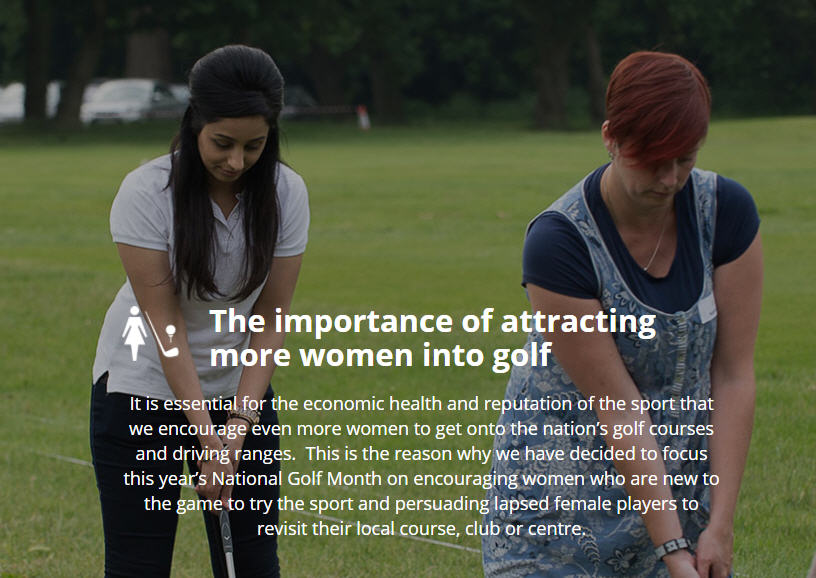 National Golf Month, the annual initiative aimed at growing grassroots’ participation in golf, was hailed a success as the campaign formerly came to an end.

Now in its fourth year of running, emphasis was placed on growing the number of women trying the game. Recognising that female participants only made up a small proportion of the playing base in the UK (14%), National Golf Month this year encouraged clubs, pros and centres to offer thousands of free group taster sessions exclusively for women.

The campaign was this year backed by a number of high profile golfers including Ryder Cup winning captain Paul McGinley and Ladies Tour pro golfers Charley Hull and Mel Reid. Further celebrities to add their weight behind the campaign this year include the BBC’s Naga Munchetty and fellow TV presenter Denise van Outen.

The British Golf Industry Association created the #GirlsGetGolfing hashtag to help boost awareness of the need to get more women on the courses on social media. It was used thousands of times by the industry, players and celebrities and seen by over 3 million people.

Doug Poole, the BGIA’s Project Director for National Golf Month, said, ‘We never could have wished for the reaction and engagement we have received this year, not only from the industry, but also to women who recognised the great health and physical activity benefits our sport has to offer.’

Bauer Media provided advertising support for National Golf Month across it’s different media outlets, including female lifestyle magazines Top Santé and Yours, to help improve visibility of the taster sessions available.  Technical support was provided by fibodo, the app which encourages people to find, book and do activities by searching for them in their local area.

Various organisations, including London Sport, Sport England and recognisable golf brands such as TaylorMade add their support to the ‘thunderclap’. It helped to create a noise on social media about the opportunities available for women to try golf this May.

Poole continued, “We have reached well over 10 million people this year through a variety of different media channels. A huge thanks has to go to Bauer Media for once again getting behind this initiative and credit to our other partners who have supported us. A mention must go to our celebrity ambassadors, Henni Goya, Naga Munchetty, Brian McFadden, Dan Walker, Charley Hull and Mel Reid for the time they have given to promoting this year’s campaign. It’s simple – without their support and the dedicated marketing power of some golf’s biggest brands, we will not have been able to achieve what we have done.”

National Golf Month is part of a string of marketing initiatives aimed at helping improve women’s participation in the UK.

“Golf is one of the few sports in which women and men can play together. It’s sociable and we have a great story to tell. With England’s Golf ‘Women’s Golf Month’ taking place in June, and the International Women’s Golf Day taking place in on 6 June, it is surely now about building momentum. If we can maintain that momentum, I have no doubt that we can help address golf’s gender imbalance and make a contribution to a culture change on our clubs and courses,” he added.