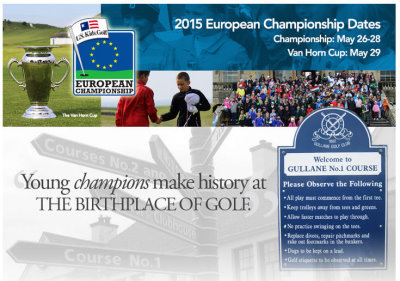 With Gullane Golf Club preparing to welcome the world’s current golfing greats when it stages its first European Tour event in its 132-year history, the players of tomorrow will also be heading to Scotland’s Golf Coast, East Lothian, to battle it out for Europe’s most prestigious junior title.

A record field of 604 competitors are lined up to play in this year’s U.S. Kids Golf European Championships which tees off on Tuesday, 26 May.

Now in its 7th successful year, the tournament has become a staple event on the calendars of budding young players, who love the challenge of competing against their counterparts from across the globe over four East Lothian golf clubs.

This year’s event will have extra appeal for the competitors, coming just a few weeks before the world’s sporting media will be focussing on Gullane Golf Club – one of the venue courses for the European Championships – as it hosts the Aberdeen Asset Management Scottish Open.

Tournament co-ordinator and Gullane Golf Club Professional Alasdair Good, said: “There’s no doubt there will be added interest and excitement as the young players get a chance to say they will be playing in a tournament that hosts one of the best events on the European Tour.

“With world No 1 Rory McIIroy, and the likes of superstars Phil Mickelson, Justin Rose and Matt Kuchar, as well as home favourite Stephen Gallacher, all confirmed for the Scottish Open, it can only significantly boost the profile of East Lothian in the minds of these young players.

“We are looking forward to East Lothian hosting both the young stars of the future alongside the best of the best at the Scottish Open.”

Alasdair said there is an open invitation for spectators to come to watch any of the play over the four courses for free on any of the competition days.

Dan Van Horn, President and founder of U.S. Kids Golf, said it was a tribute to the reputation that the European Championships has forged that the tournament continues to go from strength to strength.

“It is so thrilling to – once again – have a record field play in the U.S. Kids Golf European Championships. That is all the more pleasing as we are now in our 7th year in East Lothian, yet interest in the tournament from around the globe seems to grow and grow.

“The enthusiasm and skills on show at the championships is always second to none, evident in the incredible scores that have been recorded in past years.

“The championships provide a real opportunity for young girls and boys to meet new friends whilst perfecting their play and I have no doubt that some of the talent nurtured at these championships will one day be teeing up to play in a future Scottish Open.”

The top finishers in each category will compete in the Van Horn Cup at Luffness New Golf Course on May 29 – a showpiece event, modelled on the Ryder Cup, where the best European players are matched up against the top golfers from the rest of the world.  The top five finishers in each age and gender group also automatically receive an invitation to the U.S. Kids Golf World Championships at Pinehurst Golf Club, North Carolina, in August.

The Foundation is the charitable branch of U.S. Kids Golf – the world’s largest producer of junior golf equipment. The firm has pioneered the development of golf clubs for young people, eliminating the problem of kids using heavier, cut-down adult clubs which often hurts developing swings and discourages budding players.