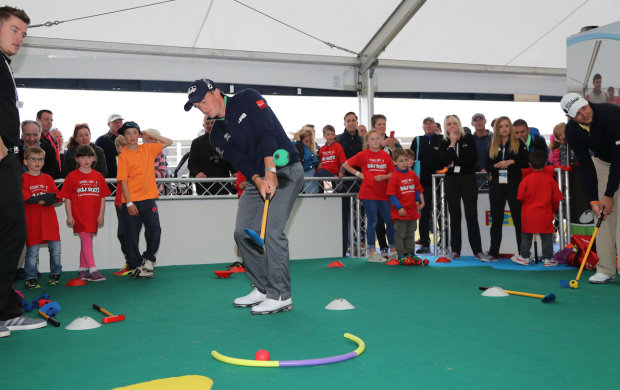 Thanks to “fantastic” support from Titleist over the whole summer, players of all ages have been teeing up the #1 ball in golf bearing the logo of ‘HSBC Golf Roots’ – the Golf Foundation initiative which helps increasing numbers of young people to enjoy the benefits of golf.

Titleist has been a strong supporter of national charity the Golf Foundation for many years now. Throughout this year, the brand has provided golf balls for numerous prizes and promotional events involving schools, communities and golf clubs. Each golf ball promotes HSBC Golf Roots, which encourages thousands of young people to ‘Start, Learn and Stay’ in the sport.

HSBC Golf Roots reaches 500,000 boys and girls per year in a community to club pathway that has ambitious targets. For example, in England, by 2018 the charity is looking to encourage 50,000 extra youngsters through the gates of a golf club each year via HSBC Golf Roots, with 15,000 playing regular golf from there.

Titleist golf balls were supplied as part of the successful second staging of the Golf Foundation’s national StreetGolf championships in which youngsters from footballing communities in towns and cities up and down the country had an opportunity to learn golf for the first time in a unique project supported by Premier League for Sport and Sport England.

In the up-and-coming Golf Foundation Pro-Am (October 10th),  Titleist golf balls will be in the welcome packs and available as prizes for all competitors in this important fundraising occasion for the charity which, backed by the European Tour, is expected to raise more than £20,000 for grass roots junior golf this year.

Never was Titleist support more evident than during The Open Championship in July. Young people were able to meet new golfing heroes as they played alongside five Titleist and FootJoy Tour professionals during the week in the spectator village’s ‘R&A SwingZone’.

Spain’s Rafa Cabrera Bello, Clément Sordet of France, Ireland’s Paul Dunne, and England’s Matthew Southgate and Andrew ‘Beef’ Johnston each played alongside youngsters in Tri-Golf challenges including ‘drive for show, putt for dough’, where the pros hit the big shots and then boys and girls tried to hole the birdie putts.

Andrew ‘Beef’ Johnston would become the latest part of Open Championship folklore at Royal Troon and this started on the practice days as Andrew wowed the youngsters and Golf Foundation staff during his appearance with his energy and joy for the game.

Meanwhile, eight people who putted like Open Champions at Troon received top-of-the-range Titleist Scotty Cameron putters thanks to a special putting challenge organised by the Foundation and the Titleist team. Aimed at encouraging family participation, more than 4,100 people took part during the week, with an estimated 70% being children. Putts holed won Titleist golf balls and Titleist caps as a reward for perfect putting.

Martin Crowder, National Development Manager for the Foundation, said: “It was fantastic that these Titleist and FootJoy players gave up their time in the build-up to their biggest tournament of the year and helped us to inspire more young players.

“A big thank you to Titleist and their Tour team for making this happen, while we’d like to give further praise to this excellent golf company which really understands the importance of assisting young people from all backgrounds to get a start in the game. Titleist’s very generous gesture in supplying golf balls bearing the HSBC Golf Roots logo means that golfers everywhere will learn more about our objective of helping the next generation to enjoy the benefits of the game.”

Matthew Johnson, Titleist Brand Director, said: “We are very proud to support the Golf Foundation and the fantastic work they do to engage with young golfers. The activities that they run throughout the year, especially at The Open, certainly captured the imagination of many juniors, and we are grateful to our Brand Ambassadors who were able to take part and help inspire the next generation of golfers. Our association with the Golf Foundation is an authentic showcase of our continued support for all levels of the game, from grass roots through to the best players in the world.”