The European Tour, supported by The R&A and EDGA, has made a film that will “open the eyes” of everyone to the high standard of a generation of golfers with a disability now competing against each other internationally. It is hoped their story can be used to inspire greater understanding, inside and outside of golf, of how the sport can enrich the lives of those who have suffered illness or impairment.

European Tour Productions has captured the quality of players who say they are ‘Golfers First’, as they compete in high-standard tournaments with the European Disabled Golf Association (EDGA), in Europe and as far afield as Australia. Many of the players in the film are ‘single figure’ golfers who smash drives, swing irons and hole putts while having been challenged by a range of impairments.

EDGA believes this short video and a longer 30-minute film should be seen by anyone interested in sport and health as it emphatically demonstrates that golf can offer great benefits to people with disability.

The European Golf Association (EGA) gave full access for filming during its European Championship for Golfers with Disability (June 6-8), at the Troia Resort, Portugal. European Tour Productions filmed and spoke with many of the 75 players from 13 countries competing for three trophies in the men’s, women’s and wheelchair categories.

EDGA is launching the films on social media today.

A longer version of the film can be watched HERE

In the short film, Holland’s Richard Kluwen (pictured) who won the wheelchair category, says: “People look at it [disability sport]: it’s important to open the eyes and you can show them, it’s different yes, but we can play golf like anybody else.” In the longer film, you see Belgium’s Adem Wahbi (1.8 handicap) smash a drive before saying: “When I am on the golf course I don’t feel disabled. I just see in front of me, I don’t see down, I don’t see behind me, I just see the hole and that’s it.” 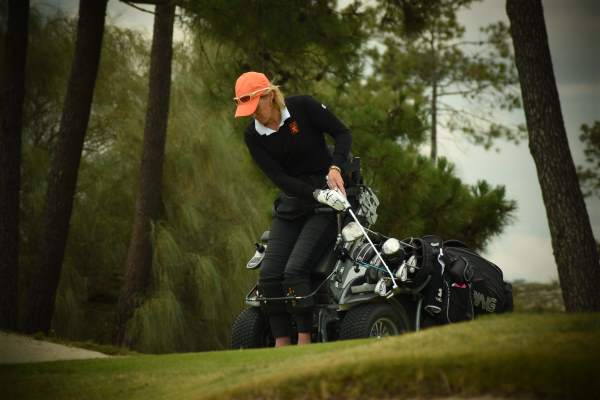 Dutch player Monique Kalkman (pictured right), a former gold medal winner and World Number One in Paralympic tennis, says: “Golf is like a therapy but it doesn’t feel like a therapy because you’re playing a game. You find yourself confronting this piece of nature and trying to get the best out of you. The level of play has grown big time over the last couple of years.”

EDGA spokesperson Sue Bennett said: “We are hugely grateful to our friends at the European Tour and The R&A for their support and the experience and technical excellence of the team making this film from European Tour Productions. We know they put in so much time to make this film work in both the shorter taster version and the full-length showing. A big thank you also to the European Golf Association for their great help.

“We are now asking all friends in the golf media to share this film because it shows how good these players are – which may surprise a few people – while it demonstrates the potential of the sport to positively change people’s lives.”

Interested readers can also check out a growing group of player interviews in ‘EDGA Profiles supported by PING’ on http://www.edgagolf.com – where leading players talk openly about how golf has given them their lives back after trauma.

Other supporters of EDGA include The Ryder Cup Europe Development Trust and 26 national golf federations, plus several valued partners including PING and the Association of Algarve Tourism.