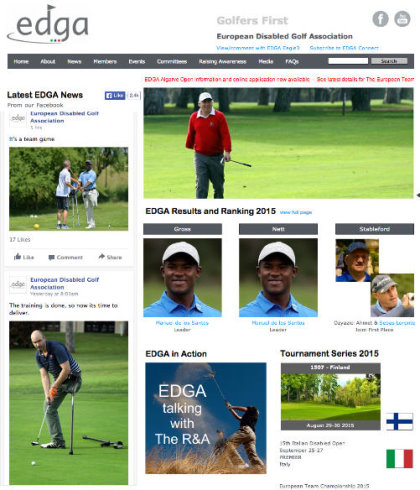 The European Disabled Golf Association (EDGA) can report growing interest in its activities, especially its ‘Tournament Series’ of nine events in Europe which are staged for all levels of golfers with disabilities.

It is now predicted that 2016 will present even more opportunities for competing players and also for brands and organisations seeking to partner and support EDGA events.

The Tournament Series 2015 has been staging tournaments in countries Portugal, France, Spain, Denmark, Czech Republic, Holland, Finland, Sweden, and Italy (with the season closing in November). With three series of tournaments which offer opportunities for elite and emerging players alike there has never been a better time for players to get involved. Each tournament typically has between 50 and 75 golfers with disability competing, with numbers likely to grow in 2016.

This year’s Tournament Series is the largest schedule put together by EDGA (in 2013 there were just four tournaments staged), while it was recently announced that Ryder Cup star and former World No: 1 player Lee Westwood has become an EDGA Ambassador.

The Association, supported by The R&A and The European Tour, has benefited from a number of sponsors at a local level. One such sponsor has now taken the next step and has become the Official Golf Destination of EDGA. The Algarve Tourist Association is now a corporate partner and is looking forward to strengthening the relationship which has developed over the last two years.

EDGA President Tony Bennett believes that because of the enhanced “Tour-feel” of the events this year, its settled and growing programme of tournaments, plus the interest being created by the players who are reaching increasingly high standards in competition, this is now the ideal time for potential sponsors to begin a dialogue with EDGA to help grow the Tournament Series further in 2016 and beyond.

Tony Bennett said: “It has been a good year for EDGA as we move towards reaching our objectives. The level of tournaments has really improved, although we are still working to make every event even better. We will implement a change for the Access Series from the start of 2016, to allow the host organising committee to decide on which disabilities are accepted, so offering an even greater opportunity for players to compete.

“Our newly established European ranking has been very well received and will be extended in 2016. As we approach the final few events of the year the leading players are producing some excellent competition and with tournaments in Finland, Italy, Spain and Portugal still to come, we expect an exciting finish to the year.

“Thanks to the tireless work of the dedicated team at EDGA, together with the quality of players, not only as golfers but also as individuals, we have been able to bring a growing awareness of golf for the disabled.”

Tony added: “Looking ahead to 2016, it is perhaps a good time for potential partners to consider how their input at a crucial stage in the growth of EDGA’s Tournament Series could be of benefit to their brand and also to golfers with disability.

“EDGA is grateful for the support of The R&A and The European Tour, and with all but one of the 17 associations that are members being the National Governing Bodies (amateur golf federations) we feel we are receiving the encouragement and support of some of golf’s most important organisations. We are now looking to create innovative new partnerships with a number of commercially focused supporters who understand what EDGA is trying to achieve.”

EDGA is an organisation which was set up to help individuals with impairment to start, stay, succeed and enjoy golf and which now provides advice and guidance for organisations on tournaments, training and services to golfers with disability.

For more information on the association visit www.edgagolf.com  and Facebook page https://www.facebook.com/EuropeanDisabledGolfAssociation