1PUTT has officially launched the very first 1PUTT residency, a new golf concept centred around larger holes and making the game quicker, more exciting and accessible for all.

The sold-out launch event hosted at Thames Ditton & Esher Golf Club (now also known as 1PUTT Esher) had almost 200 golfers, caddies and spectators take to the course to play the game in a compete in a never before seen format.

The new, alternative, version of the game, has revolutionised the golf experience. The 1PUTT holes are bigger and designed to promote quicker, aggressive golf to take time and stress out of ‘holing out’ shorter putts. However, the bigger holes aren’t the only difference included to improve the fun on the course. 1PUTT has no dress codes and team kit and fancy dress is always encouraged. On course bars and live DJ’s bring a refreshing atmosphere to the game, and caddy spots are even available for those who want to come along for the fun but not the golf.

The event which hosts groups of any size is then centred around an après style party with bars and DJs keeping the atmosphere going through to a final shoot-out competition where the top teams battle it out in front of the whole party to determine the eventual 1PUTT winner.

The very first 1PUTT residency at Thames Ditton & Esher GC is just a few minutes’ walk from Esher train station – a short journey from London’s Clapham Junction, making it perfect for those looking to escape the city and, with full club hire part of the ticket, there’s no need to drag clubs on the train.

Golf participation is down by 40% in the UK during the last 12 years, and over 70* courses have closed in Europe in the last year meaning grass roots golf is being neglected. Multiple constraints such as difficulty, travel, time and club access have all proved barriers that have been hard to dispel in recent years. In order to combat dwindling numbers, 1PUTT’s design bridges the gap between those who have never played and those teeing off weekly to offer a fun and competitive golfing experience. 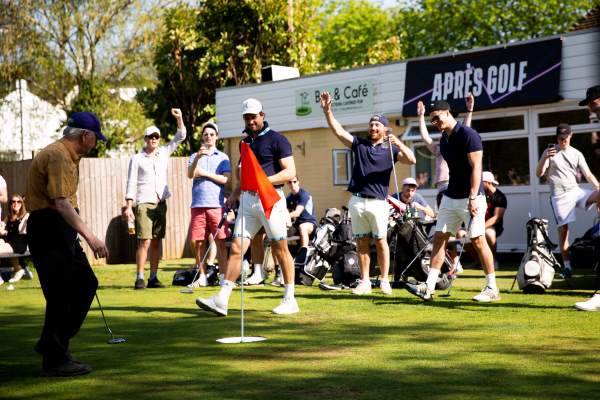 The founding two brothers, with years of family experience in the golf business, Harry and Ross McInley said: “We’ve had hundreds of people tell us how brilliant 1PUTT is and how much the game needs it. The traditional golf hole hasn’t changed for 500 years, and although we don’t want to change traditional golf, we do want to offer an alternative for those looking to get into the game and have fun. We’ve challenged the status quo and bridged the gap between friends and we can’t wait to see 1PUTT expand.”

Proving that the concept is great for all levels of golf, European Tour pro, James Heath commented: “1PUTT are bringing a fresh energy and environment to golf which is perfect for inspiring more to play the game. The bigger holes made for some exciting action in the shootout and is a great way to encourage aggressive golf and a faster pace of play.”

England Cricketer and golf enthusiast, Nick Compton who attended the launch said: “What a great concept, we loved our day. 1PUTT is making golf more accessible which is something all sports can learn from. It’s the perfect balance for someone looking to have a serious game with someone who doesn’t play as much.”

Ryan Curtis, a 9-handicap golfer has often struggled to get his friends and girlfriend to play golf commented: “1Putt is a fantastic innovation. By breaking down the barriers it’s meant my girlfriend and non-golfing friends could take part and all mentioned that they’d like to do it again. That says it all.”

The residency at Thames Ditton & Esher will run every Saturday during the 2019 summer season welcoming groups of up to 300 a day. More information and tickets for the weekly Saturday Sessions and private hire are available here: http://www.1puttgolf.co.uk/book.html