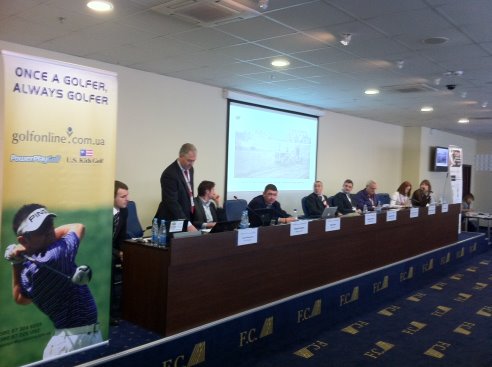 The international Turf Education Conference Ukraine 2011 was held 23-24 November in the conference hall of the Metalist stadium inKharkov,Ukraine. The main theme was “The Development in Greenkeeping using the latest technology and latest knowledge and experience.”

The conference was organized by company ENGO (Slovakia and Ukraine) in the cooperation with companies such as STRI (England), Clive Richardson (Ireland), partners of the reconstruction project EURO 2012 Metalist Kharkov football stadium.

The conference hosted the representatives of the football clubs and companies from Ukraine, Russia, Kazakhstan, Hungary, Czech and Slovak Republic, Sweden, Netherlands, and Great Britain.

The main idea of the conference was not just the sharing of experience, but also the qualifications of the speakers – the leaders in this industry, such as groundsmen of FC Metalist, Martin Galvin, Richard Hayden from STRI, groundsman of FC Rangers, Scotland David Roxbourgh, groundsman of GamlaUllevi, Roger Harry Wickholm (Sweden) and the specialists of the companies ENGO and STRI.

The project manager of the football stadium FC Metalist, Martin Galvin, could be proud of his master piece in relation to the football field. His engaging presentations cover all aspects of his work. Guests can also explore in detail turf soccer arena inKharkov, to clarify the principle of operation of installed systems and gain valuable information for their projects.