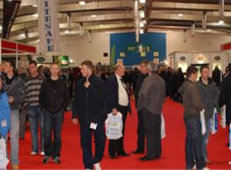 The Institute of Groundsmanship (IOG) has announced a radical review of the IOG Scotsturf exhibition, which this week celebrates its 40th anniversary.

For 2012, the IOG will look to stage IOG Scotsturf in Action – at a new venue, to be announced – and, in 2013, in consultation with exhibitors and visitors past and present, consider an outdoor show earlier in the year. In addition, investigations are already underway to link an event in 2014 to coincide with the Commonwealth Games being held inGlasgow.

The decisions have been made following a strategic review of Scotsturf operations by the IOG Board.

“Exploring the feasibility of a ‘new look’ event that will further enhance the prospects for our exhibitors and our visitors, as well as our membership inScotland, is the overriding objective.

”We’ve enjoyed 40 successful years of IOG Scotsturf and it is now time for a serious re-think and re-evaluation, and to investigate all opportunities that will further reinforce the successful Scotsturf brand with all interested parties.”

IOG Scotsturf 2011 is taking place at at the Royal Highland Hall in Ingliston, Edinburghon 2nd and 3rd November.