Talk about opening up golf to more women has been one of those topics that keeps cropping up on and off which indicates that there is an interest to get more women playing the game. Unfortunately, the effort is not a sustained campaign even though one of the gate-keepers of golf has launched a new Women In Golf Charter. Its sole intent is to promote a global drive to increase the number of women and girls participating in golf – both as players and workers in the golf industry. 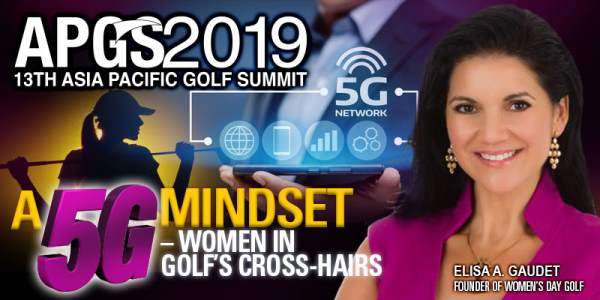 This is a great initiative, but it is very European-centric by virtue of the fact that the thrust of the drive is being spearheaded by the R&A. For this campaign to succeed all involved with golf and especially those in Asia, should respond positively to play their part to seize this opportunity and throw open the gates of golf to more Asian women and girls!

The 2019 Asia Pacific Golf Summit (APGS 2019) is taking on the challenge to provide an inspirational and motivational platform to push this initiative towards getting the job done.

In this context APGS has reached out to an incredible lady who is doing a great deal to grow the game of golf amongst women on a worldwide basis. She is Elisa A. Gaudet, the founder of Women’s Golf Day and since 2016 she has been hugely successful to get this movement happening in over 900 locations in 52 countries – through her campaign, she has engaged, empowered and supported women and girls playing golf around the globe.

She has single-handedly led the crusade and through her ability to mobilize and scale very rapidly, Women’s Golf Day (see picture above) has seen 68% growth in two years and has generated significant interest from the sports and business industry.

Her success is truly leading edge and APGS is privileged to be able to bring her out as a key speaker to share her thoughts and road map on how Asia can create a powerful launch-pad to get more women and girls to jump on the bandwagon. After all, Asian women golfers dominate the LPGA professional circuit – the Continent has the game’s heroines and role models to help generate some explosive growth in women’s golf!

Gaudet is a 20-year veteran in the golf industry with a proven track record. She is the Founder of Executive Golf International, a strategy driven golf marketing firm. She has spoken at numerous sports and business conferences internationally including the International Sports Conference in Geneva and is an award-winning writer. She is a graduate of George Mason University and has additionally studied at Stanford University, University of Valencia, Spain, Imperial College of London and University of Paris Sorbonne – www.womensgolfday.com; www.execgolfintl.com

The Summit will be staged on November 4 – 6 in the futuristic Indian city of Gurugram and the venue will be the multi-award winning DLF Golf and Country Club.

Delegate registration to the 2019 Asia Pacific Golf Summit is now open at :