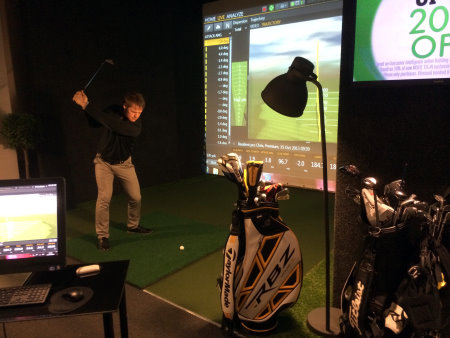 A new golf studio has opened in EC2 bringing the sport’s most in-demand technology and specialised performance coaching to the centre of the capital for the first time.

EC2 Sports’ co-founder, Chris Ingham, 29, a fully qualified golf professional, explained: “This is the first time this level of technology has been available in central London. This is not simulation gameplay, which is available elsewhere if you want it; this is the most accurate technology in golf today which allows us to take specialised performance coaching to a completely new level in this part of the city.

“There are several venues such as this in places like San Francisco or New York, but none in London until now. The level of feedback and data obtainable with this technology is astonishing – and, what’s more, it’s wholly accurate. This isn’t game simulation; this is golf analysis down to the minutest detail.

“It’s also the perfect tool for club-fitting as it analyses more accurately than ever before. And the feedback we have had from our clients thus far has been overwhelmingly positive.”

Foresight Sports GC2 – which directly measures ball-flight data at launch using ultra-high-speed cameras – and HMT (Head Measurement Technology) is the most in-demand technology in golf, having revolutionised club fitting and analysis since its launch in 2010. It was swiftly approved and recommended by many of the world’s leading club manufacturers including Titleist, Cleveland/Srixon, Cobra/Puma, PING and TaylorMade. It’s also used by many of the world’s top professional golfers and dozens of other leading brands within the golf industry.

The GC2 is also familiar to TV viewers who tune in regularly to watch Sky Sports PGA Tour coverage, as it provides the data that drives the Shot Centre. And the UK’s best-selling golf magazine, Today’s Golfer, has adopted the technology for its equipment tests and coaching features, with editor Chris Jones admitting the GC2 “…blew me away!”.

Trackman has set the benchmark for doppler radar technology, measuring ball flight and impact characteristics to previously unseen levels, and the Trackman III is the culmination of 10 years of R&D. Clients can store their shots and test scores on a database and track their progress, even complete a combine test to see how they much up against players around the world.

Ingham’s partner in the business, Elliot Godfrey, 30, formerly the head professional at Hanbury Manor, added: “This technology eliminates any doubt about the process of hitting the ball. It tells us – and the golfer – exactly where it went when it left the club-face, and why it went where it did. It gives accurate data on every aspect, so there’s no guesswork involved any more, like there still is with many other products.

“It gives you access to the sort of information you simply can’t get elsewhere and simplifies the player/coach relationship. Golfers can see the value immediately and really buy into the technology – and, with some of the world’s top courses digitised within the Foresight software, anything that’s learned in practice can be taken ‘out’ onto the course.

“Nowhere else in the city can you get this level of coaching or club-fitting on the same technology used by the world’s very best golfers. This is a world-class facility in the heart of our capital. We’ve already had a lot of visitors who are members of the health club and some others have travelled across the city to use the facility. We’ve even welcomed an England international footballer in recently for a lesson.”

Whether for coaching, club-fitting or an evening of the most accurate indoor golf imaginable, EC2 Sports has put a better golf game within easy reach of anybody working or living in London.