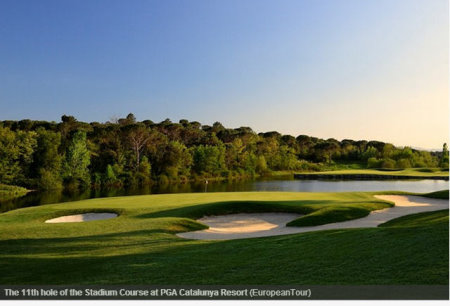 European Tour Destination PGA Catalunya Resort, the stunning 36-hole venue near Barcelona whose Stadium Course has been ranked Spain’s number one for the past three years, will host the 2014 Open de España from May 15-18.

Spain’s national Open, which has been part of the International Schedule every year since The European Tour’s inception in 1972, returns to the widely acclaimed resort for the first time since 2009.

The venue, which hosted its first Open de España a year after its opening, in 2000, has held the European Tour Qualifying School Final Stage since 2008, and last summer it was elevated to Destination status within European Tour Properties’ exclusive network of 13 world-class golfing facilities. It was recently awarded the accolade of best course in Spain by the Top100Courses website, while Golf World magazine has judged the Stadium Course at number five in their most recent 100 Best Courses in Continental Europe.

Located an hour’s drive from the vibrant city of Barcelona and only 20 minutes from the Michelin-starred restaurants of Girona, PGA Catalunya Resort was originally designed by Spanish legend Angel Gallardo and Ryder Cup star Neil Coles MBE with a view to hosting The 1997 Ryder Cup.

Extensive development in the last few years has enhanced its reputation as one of Europe’s very best integrated golf and residential resorts in Europe, with some of the best practice and coaching facilities in the world.

Come May, Europe’s finest players will be challenged by the 7,333yds, par 72 Stadium Course, which was lengthened by approximately 200 yards in 2012 thanks to seven new championship tees. Away from the competitive action they will benefit from the magnificent practice areas, including a 2,000 square metre putting and chipping green, the largest in Spain and the only one of its kind in Europe.

Julio Delgado, Chief Executive of PGA Catalunya Resort, said: “The Open de España is the only European Tour event in Spain in 2014 and so it is fitting that it is returning to the country’s number one ranked golf course, the Stadium Course at PGA Catalunya Resort. The venue has undergone a transformation in the past five years, with a significant upgrade to the Stadium Course, new practice facilities and the development of luxury golf properties around a private residents’ club. PGA Catalunya Resort is a world-class destination and we look forward to welcoming the Open de España back.”

Keith Waters, Chief Operating Officer and Director of International Policy for The European Tour, said: “PGA Catalunya Resort is a world-class venue and we are delighted that the 2014 Open de España will be held there in May. We have long enjoyed a successful relationship with PGA Catalunya Resort and this announcement further strengthens that partnership.

“The Stadium Course will provide an excellent challenge for the Tour’s best players and they will enjoy the quality of the hotel and facilities at the resort. It is also a superb viewing course for the Spanish and international fans attending this historic event.”

PGA Catalunya Resort is also the location of the world’s first Sergio Garcia Junior Academy, set up by the ten-time European Tour winner, who claimed the Open de España title at El Cortijo Club in 2002. The academy focuses on nurturing young golfing talent and introducing the sport to children with physical and learning difficulties through its ‘Golf Adapted’ programme.

Insurance company Reale Seguros will be principal sponsor of The 2014 Open de España with additional support from the Generalitat de Catalunya. Other notable contributors will include the Tourism Board Costa Brava Girona, Meliá Hotels, Catalan Golf Federation, City Council of Caldes de Malavella and the Sponsors Club of the Royal Spanish Golf Federation.