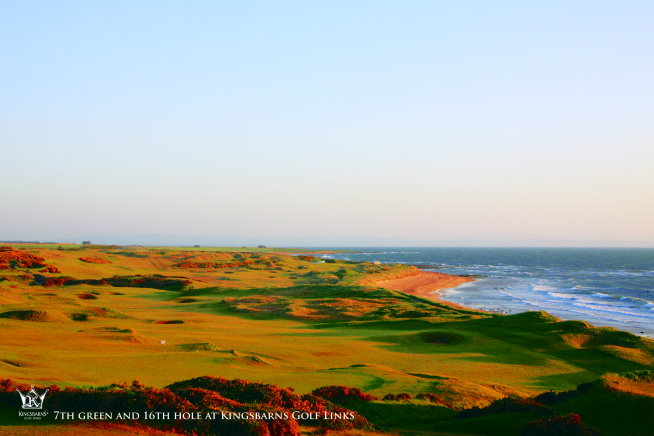 Kingsbarns Golf Links has started its second decade in operation with a flourish as the 2011 season has seen it reach a significant milestone, win a prestigious award and achieve an impressive rise in the golf course rankings.

Following last year’s tenth anniversary celebrations Kingsbarns has refused to rest on its laurels and has continued the momentum this year with some notable achievements.

First, the magnificent links in the East Neuk of Fife surged past 300,000 rounds of golf played since it opened in 2000. It has continued to attract substantial numbers of golfers from traditional overseas markets such as North America but increasingly from continental Europe with Scandinavia and Spain proving particularly strong markets.

Kingsbarns cemented its place among the top links courses around the world after being ranked No. 54 in the latest biennial rankings published by Golf Magazine inAmerica, a rise of seven places on the 2009 rankings. Golf Digest Magazine in the USA has also ranked Kingsbarns as No. 12 in their authoritative Top 50 Links inGreat Britain & Ireland list.

The Scottish golf industry acknowledged Kingsbarns´ achievements at its annual awards earlier this month by voting it the Golf Course of the Year for the fourth time in its history. The Golf Tourism Scotland awards are recognised as the Home of Golf’s industry Oscars.

As well as these outstanding achievements a number of other improvements have been made this year. The new Kingsbarns website, with an online booking system which enables golfers to book tee times at the last minute, was launched in April. The system is designed to accommodate golfers who arrive in the St Andrews area without advance bookings and those who have been unable to secure tee times at other courses nearby.

In July Kingsbarns became only the second venue in Europe to join IMG Prestige, a high end reciprocal programme involving a network of premier golf courses and partners from across the globe.

Alan Hogg, who took over as Chief Executive of Kingsbarns Golf Links this season, said, “It has been an eventful year at Kingsbarns but a great deal of progress has been made in a number of areas. The improvements in the course rankings and the award from Golf Tourism Scotland are testimony to the skill, dedication and hard work of the team here. We will be working hard to keep this momentum going in the 2012 season and to ensuring we provide an outstanding experience for our golfing customers.”

As one of the host venues for the Alfred Dunhill Links Championship, Kingsbarns has continued to attract praise from some of the top players in the game. The 2010 US Open Champion Graeme McDowell said: “It is one of the most beautiful courses in the world for sure. Having won the US Open at Pebble Beach this is probably something that compares to that kind of view and experience. It is a great course to play and it has gone from strength to strength every year. It has really grown on me. I enjoy it more and more every time I come back.”