New Accolade Adds To Buzz Of Excitement At Castle Stuart

The world-renowned Castle Stuart Golf Links has scored a notable double with the award of a prestigious international sustainability accolade and the success of a flagship conservation project involving hundreds of rare bumblebees.

The Scottish Open venue has been praised both for its contribution to date and stated targets for continual improvement in the coming years.

Jonathan Smith, Chief Executive of GEO, praised the club for its achievements. He said: “In a short period of time, the development and management teams at Castle Stuart have created a world-class golf facility that has brought tangible benefits to the local environment, community and economy. 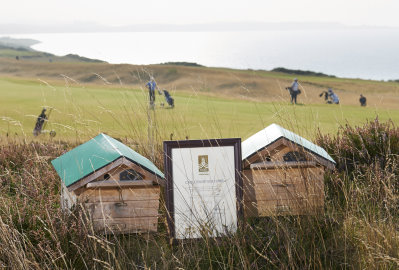 “This is well-deserved recognition for their leadership in sustainable development in Scotland and more widely across world golf.”

Castle Stuart Golf Links general manager Stuart McColm, said: “Obtaining GEO Certified status is a fantastic reward for our team’s efforts in making Castle Stuart an environmentally and socially conscious venue, and demonstrates our desire to continue to learn and share as we go forward.”

“We are privileged to have such a wonderful location and right from the outset we have done everything possible to ensure we protect, and enhance, the land and its wildlife so it can be enjoyed by many people in the years ahead.”

A new innovation at Castle Stuart this year has seen the introduction of hundreds of rare bumblebees as part of the course’s pioneering biodiversity work.

Bumblebees are important to the ecosystem as pollinators of wild flowers which host a range of insects and provide food for birds. Over the last 50 years several British species of bumblebee have declined markedly, largely due to loss of habitat.

At Castle Stuart they feed on swathes of heather, introduced to the course when it was developed from farmland near Inverness, providing a sustainable source of food in an area where the bees had all but disappeared.

Chris Haspell, the Castle Stuart course manager, said: “The heather doesn’t just look nice on the course; it provides an important habitat for the bees and other insects. Their presence brings small mammals and birds to the site as part of the overall environmental management plan.”

The links course, which hosted the Scottish Open from 2011-2013 and will again welcome the competition in 2016, was created on a 95-hectare site adjacent to the Inner Moray Firth Site of Special Scientific Interest and Special Protection Area, and the Moray Firth Special  Area of Conservation. Working with statutory bodies, including the Scottish Environment Protection Agency, the holes were created and shaped using only materials from the site, which significantly reduced the carbon footprint during construction.

The land had previously been intensively farmed using pesticides and herbicides to help produce arable crops. Castle Stuart’s eight full-time and five seasonal course management staff now actively work just 24 hectares of maintained playing area and have reduced the use of chemicals on the land by around 85 per cent.

Long rough provides habitats for ground nesting birds like skylarks and short eared owls and several buildings host kestrels, barn owls and other small birds like swifts and swallows. Badger gates have also been installed to allow free access for the animals whilst keeping out rabbits.

With its acclaimed, art deco-style, low carbon clubhouse supplied by a ground source heat exchanger, Castle Stuart consistently strives to reduce energy and water consumption. All surface drainage run-off from the course is filtered three times before it reaches the Firth to avoid any pollution risk.

In addition, a one-acre site on the course is given over to testing 40 species of fescue grass – with another 40 species being added to the trials this year – to select those which best suit the Highland climate, need the least water and are the most disease-resistant.

Chris Haspell, who spent 12 years working in Denmark where golf courses are built to the highest European environmental standards, now acts as a consultant to golf course managers in other parts of the world, including Denmark.

He has recently been helping the hosts of next year’s US Open, Josh Lewis and Eric Johnson, at Chambers Bay in Washington State, and aims to be at the tournament to see fescue played on in a Major for the first time.

He and Stuart McColm also give regular talks to golfers and environmental groups about the links’ ecology. Earlier this year the club was selected as a centre of learning by the Chartered Institute of Ecology and Environmental Management for an event on sustainable golf best practice.

“We set out to create a world-class links golf course that also enhances local biodiversity”, said Stuart. “Castle Stuart is right up there in terms of ecological awareness and we are now seen as a model for other courses to follow. We like to work with local people, planners and the regulatory bodies rather than against them.

“The team at Castle Stuart are dedicated to making things better, not just for the golfers, but for the wider environment.”