London Golf Club, a European Tour Destination and host venue of the 2008 and 2009 European Open, has unveiled plans for a new 5-star hotel and spa.

The development has been innovatively created in the style of a traditional Kentish village, and will nestle in terrain overlooking the opening holes of the Heritage Course.

Following close co-operation with local authority Tonbridge and Malling Borough Council, planning permission has been received. This heralds a significant development for a fast-growing region that is benefiting from a long-term golf travel marketing strategy supported by Visit Kent, the county’s official tourism website – the Open Championship returns to Kent in July 2011 – and the London 2012 Olympic Games.

George O’Grady, Chief Executive of The European Tour, said: “When we announced our joint venture partnership with London Golf Club at the European Open in 2009, the vision was to create a world-class golf destination. 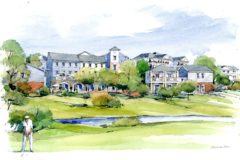 “The golf facilities are proven at every level, from hosting full European Tour competitions to special events such as the recent Golf LIVE show, which was a huge success and attended by 13,000 golfers and their families.

“Now, with the development of a striking 5-star hotel and spa within convenient proximity of London and its international airports, plus fast, efficient road and rail links to continental Europe and the rest of the UK, London Golf Club is set to position itself among the world’s elite golf resorts and we plan to host major European Tour events in years to come.”

George O’Grady confirmed that a European Tour Regional Office would be included as part of the development. Plans to build a European Tour Performance Institute are also at an advanced stage, giving players of all abilities, including newcomers, access to the very latest biomechanical technology as well as a full range of health and fitness advice previously only available to tournament professionals.

The hotel, developed around an attractive Arrival Courtyard and Main House, will offer the highest international service standards and feature 130 guestrooms, including junior suites, butler-service suites and a presidential/VIP suite. There will also be a variety of dining options, including a speciality restaurant, banqueting and meeting accommodation, valet parking and landscaped gardens.

The spa will be linked to the hotel and enjoy separate access from the Arrival Courtyard enabling club members, day visitors and the local community to enjoy the facilities. An extensive array of treatment rooms will be complemented by a relaxing pool that will also be open to non-residents.

Charles Fairweather, Chairman of London Golf Club, said: “This is a significant hotel and leisure development for London and south-east England, and is set to become an important destination for The European Tour, international golf tourists from continental Europe and further afield, as well as golfers from London and the UK.

“While this is a sizeable development with 5-star facilities and service, we are proud of the design work that has gone into creating an intimate, village-style resort that will nestle in the landscape, stepping down the contours to minimise visual impact.”

Charles Fairweather added: “This is just the beginning of the first phase of development. The long-term strategy for London Golf Club is to create a world-class destination and venue that will host the biggest and best sporting events over the next 20 years.”