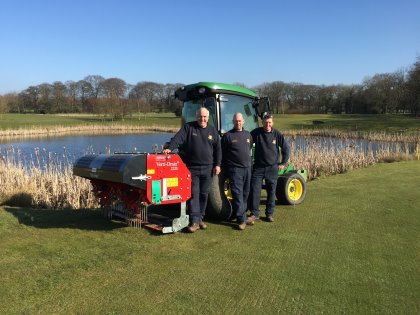 In the autumn of 2015 Ramside purchased a high-speed Verti-Drain 2220 to accompany the heavy-duty 2.5m Verti-Drain 305 they’ve used for over 20 years.  “We were in need of an ‘all-round machine’, said Roger, “with the 2220 finding its natural niche over the 36 greens. Having our own range of machinery means we’re not relying on contractors and gives us the flexibility to use it as much and as often as we want”.  He, and his team of 10 greenkeepers, are looking forward to running the two machines in conjunction to relieve compaction and keep surfaces free draining around the course.

“One of the benefits of adding a second Verti-Drain to our portfolio was the option of interchanging tines with the larger model. We can run tines in the 305 and when they get down to 9 or 10” long they become perfect to work in the 2220. Recycling the tines mean we can maximise the life of them and reduce our costs.” Another selling point was that, compared to competitor machines, the Verti-Drain is fitted with hydraulic depth control meaning adjustments to the tine depth can be done from the tractor seat. “As we have irrigation pipes in the greens I can alter the working depth quickly and easily to accommodate this.”

Roger also commends Redexim on the 2 bolt locations which hold the tines into the aeration heads, holding them in place securely even when the tines start to wear.

Roger and the team have received some great feedback from members and players about the condition of the surfaces.

“With the Verti-Drain 2220 being lighter, faster and more manoeuvrable we can work on new areas and really focus on the greens, tees, approaches and walk areas more than we’ve been able to in the past. This year so far we’ve be out on the greens aerating regularly to get them through to October, it will prove itself to be a real workhorse for us.”