A two-month burst of TV advertising on Sky Sports Golf, featuring a £200-off promotion, is the highlight of SkyTrak’s autumn 2018 marketing campaign in the 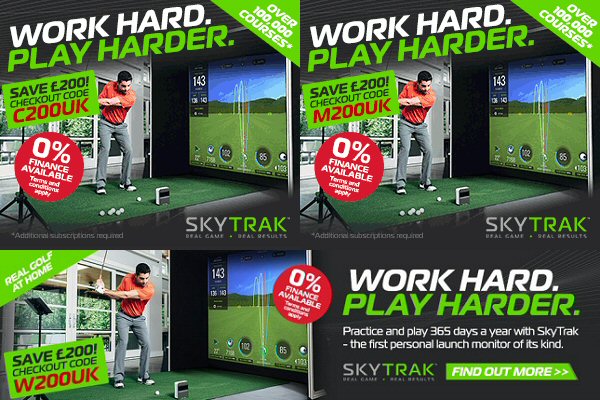 UK. SkyTrak’s rapid growth will also be boosted in October, November and December by advertisements in a wide number of consumer golf websites and magazines, and by a social media push.

In total, ads promoting SkyTrak will appear in almost two dozen different UK media between now and Christmas – including GolfBusinessNews.com

In the autumn promotion, SkyTrak is available at a £200 discount with a valid Offer Code until November 30th.

The campaign will provide sales support to the fast-growing team of SkyTrak Showcase Dealers in the UK as the £1,895 personal launch monitor and golf simulator, which offers a 0% finance pay-monthly option, becomes an increasingly popular retail item with the general golfing public.

“We estimate that well over 500,000 UK golfers will see a SkyTrak advertisement this autumn” said SkyTrak’s James Holmes. “We expect this campaign to drive plenty of fresh traffic into SkyTrak dealers, where interest in the product will be high.

“Golfers are quickly realising that they can play real golf at home, with a SkyTrak, at a fraction of the cost that they would expect. Our finance option now makes it affordable to have your own professional-standard launch monitor, something which was unheard of just a few years ago.”

The print and web campaigns lead with the phrase ‘Work Hard. Play Harder’, describing a golfer’s ability to practice and play 365 days a year, with the ability to access over 100,000 golf courses in simulator mode, with a SkyTrak.

The campaigns have been planned and bought by SkyTrak’s UK agency Magic Hour Media. Call +44 (0)1844 296350, email sales@skycaddiegps.co.uk or see www.skytrakgolf.com for all details.