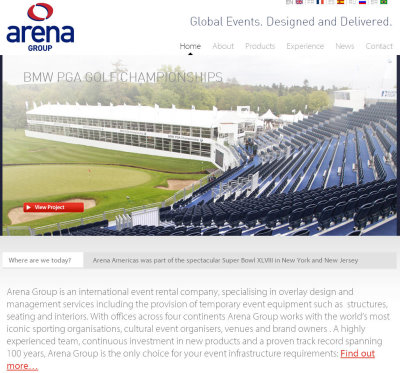 Ryder Cup Europe has awarded a new contract to the Arena Group to supply a comprehensive range of temporary event infrastructure at the core of The 2014 Ryder Cup at Gleneagles.

Following a competitive tender process, Arena Group will once again be entrusted by Ryder Cup Europe to design and install cutting edge seated grandstands and multi-storey venues around the PGA Centenary Course.

Arena Group will provide triple and double decker hospitality structures overlooking the greens of the 18th and 12th holes, including interior fit out and furniture as well as the state-of-the-art media centre, grandstand seating and on-course event structures across the golf course.

Grahame Muir, CEO of Arena Group, UK & Europe, said: “We are proud to have been selected to be part of the team which will create an unforgettable Ryder Cup in Scotland.

“The investment we made into developing clearview and Arcus Horizon products last year at the Olympics have allowed us to improve the range and quality of the design-led overlay we have been able to offer The Ryder Cup team for Gleneagles.”

Led by Project Directors Bradley Merchant and James Thomas, the internal planning and construction teams from Arena Group are relishing the prospect of delivering a successful event.

Arena Seating is finalising plans to install approximately 15,000 seats around the course, including a 1,500 (minimum) capacity horseshoe shaped clearview grandstand around the first tee, as well as a 2,000-plus capacity grandstand at the 18th green. Both grandstands have been designed to enhance the incredible atmosphere generated at the biennial match between Europe and the USA.

Elsewhere on the course, tiered seating grandstands will be positioned to give spectators optimum viewing experiences as they follow the players, with some vantage points allowing views of several greens and tees from the same position.

Edward Kitson, Europe’s Ryder Cup Match Director, said: “We are delighted to appoint Arena Structures and Seating to deliver the tentage and grandstands at The 2014 Ryder Cup at Gleneagles. We have a very strong partnership with Arena having worked with them at numerous European Tour events and at every home Ryder Cup match since 1989, and their professionalism and exemplary standards made them an automatic choice for Ryder Cup Europe.”